Friday was to be a day with my brother and Mom. It was to be our Christmas together since he wasn't able to make it to my house. I started out waking with a list in my head, so I determined it was time to get it out of my head and complete it already. Heading out about 9 am, Zack and I got to the office to remove all of the Christmas lights, ornaments, bells and snowflakes that are way above my height. It is so wonderful having a son who is 6' 5" and can reach up to the ceiling, even the gutters without a ladder. Because of the blood transfusion is energy level is good. He is excited today because he and several of his friends are heading to "the farm" a 30 acre track of land with a hunting cabin. The kids all go with their ATV (All terrain vehicle) and ride around on the property. When not riding, they are hunting (well trying to anyway).  This is something that Zack has been looking forward to for a long time. His friends started going up this summer, but he has only been able to make it once due to his treatment schedule. Now, he has the ATV he received as a gift from his Papaw a couple of months ago so that makes it even more fun.

Within thirty minutes everything is taken down and we are on our way to the bank, post office and then to get my car inspected. (remember the list?) Zack was meeting one of his friends at a local tire store to help move some tires for a little extra cash and they were then headed out together to get ready for the trip. A part of me is anxious. I so want to protect him, every minute of the day, but I know that I need to let him go and trust that he is going to be okay. Hanging on doesn't help anyone. I make him promise that he will not do anything stupid, like stunts or going too fast, wear his helmet and KNOW that accidents can happen on these vehicles and we have been through enough, he doesn't need to add one more thing to HIS list. He tells me "Mom, I'm the one that is conservative on these things, remember when I flipped over Darrick's bike a couple of years ago?, well that scared the hell out of me!" Okay, Okay, I get it! Later in the day he calls me angry, the ATV is leaking fuel, to him this immediately means defeat. To me it means I must be a cheerleader and tell him one more time that stuff happens and he needs to figure out how to solve the problem, not get angry. A little while later, Frank calls and tells me they figured out what the problem was and he was on his way. Whew!!! I can breathe AGAIN!!!! Anxiety level can be toned down just a little more.

After I  drop Zack off , I head up to Moms booth at Eclectic Cottage on Main. She had given me a box full of jewelry to put out,. When I arrived, her booth was such a mess that I took the extra time to take down the Christmas decorations, clean up and put out the new items. Within an hour I am back on the road and headed to Mom's house. Bob is resting, so Mom and I head out to get groceries and lunch. I had planned on 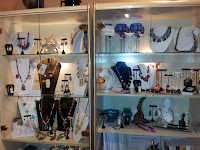 spending the day with Bob, but he was not feeling well, so Mom and I spent the day together, something we haven't been able to do in quite awhile. While in the store in Hendersonville a woman approaches me asking if I was Zack's mother. Not really knowing that many people in Hendersonville anymore, I was surprised. She introduces herself as one of Zack's former teachers at Pisgah Forest Elementary. It had been so long I didn't recognize her. She tells me she read about him in the letter to the editor and was getting ready to send a card. She pulls out some money from her pocket and hands the bill to me saying she was going to put it in the card. I stand there in disbelief!! Here is someone we haven't seen in year and yet she is sharing how special Zack is to her and how she has him on her prayer list at Church. (something a lot of people have shared with us). I find Mom and share my experience. She just looks at me and says "Zack has touched many lives". It was so nice to just have a relaxing day with Mom, I'm so blessed that she is still around and every time I can spend with her is another blessing. Before I arrive home, I receive a call from Zack saying they had arrived at the farm safely. For now, at least, I can breathe easier knowing he is safe.

Saturday, Rhonda and I agree to meet at the office at 10 am. Whenever the office is closed for the week during the Holidays, I take advantage of the time and "clean house" so to speak. I had Rhonda handle the back filing while I packed up the Christmas and loaded it in the car to take to storage. Rhonda and I took a "break" and brought several boxes to the storage area and grabbed a quick lunch. When we returned, she continued with the filing and I with finishing up the cleaning of the office. Zack calls me out of the blue and is having problems with his right eye. He tells me that it feels like someone punched him. He starts to cry and says that he can barely see out of it and the one time he has fun scheduled and now his eye is hurting so bad. It tears me apart hearing him cry and not being able to run and care for him. Though they are a couple of hours away I offer for Dad and I to come down there and see what we can do. He tells me no and he agrees to wash out his eye (he already took out his contacts) and if someone has eye wash, use that. Then I tell him to cover up his eye to force it to rest. He sounded better when we said goodbye, my heart is sad for him.  All we ask is for a couple of days when he doesn't have a problem. Rhonda and I finally wrapped up around 8 pm with a major sense of accomplishment. She called me on her way home and was so excited as it was snowing in Mills River (about 20 minutes away). Our town never did see the snow, but she said it was beautiful at home (Asheville, where we go for treatments). I am home and feeling every muscle in my body so I crawl in bed. Frank tells me that he had spoken to Zack just an hour earlier and his eye is doing better. He told Frank that he had laid down and slept for a couple of hours with his eyes covered and was now feeling better.

Sunday was my day to take down the Christmas decorations at home. Frank, his brother and friend have gone fishing for the day. He is taking advantage of his time off for the Holidays and catching up on his fishing since he had been so sick last month. I love when the house is empty and I have so much to do, I can run around and know that everything will be finished by the time he and Zack return. As usual, I clean out my closet and get a back of donations together, take down all the Christmas decorations and rearrange the living room (my form of entertainment). By late afternoon Frank returns, with sad stories of his failed attempts at fishing. Usually the joke is that the fish jump out of the water because he is in their presence, but today neither he nor the other guys fared well. Zack calls and is back in town. He wants to go and hang out with Drake for a little while. I ask him to first stop by the house so we can say hi and check out his eye. He comes by and we are so excited to see him back safe and sound. He goes up to Frank and picks up his 5' 9" frame while hugging him. He tells us of his riding around, how one of the parents had eye drops and helped take care of his eye (which looks a little red, but not swollen). He was able to hunt a little, but didn't shoot anything. The owners are getting ready to sell the property, but he has been invited down one more time. Zack heads out (the life of a teenager) and goes up to Drake's. He knows that he will have to stay home most of tomorrow and Tuesday to finish up his schoolwork, Wednesday and Thursday are his strong chemotherapy days followed by a shot on Friday.