The past two days have been filled with every emotion in the universe. Zack has been working feverishly to complete his schoolwork in order to be an early graduate. What this means is, he will still cross the stage with his friends in the summer, but will be finished with all of his classes by early next month. He has not put 100% effort out up until now. I can't imagine what it would be like to find motivation all the while going through all this crap he has to go through. I am proud and yet have also been very frustrated at this whole process. The "home bound" schooling, having to fuss at him for not doing his work, while also "coddling" him as he goes through chemo, radiation, shots... There is emotion one!! frustration 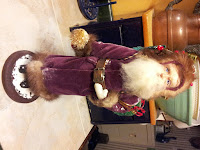 He didn't have to go to the clinic yesterday, so that gave Zack the entire day off. I went to work and was able to focus better, since he was not having a procedure.  I am getting more in the Holiday spirit, so that is contributing to my "better" mood.  We play the classic Christmas music at the office, Bing Crosby, Pearl Baley, Wayne Newton, etc.. I know.. lame.. but I totally love this kind of music and it brings me back to happier times. Times that were not so stressful, fearful and downright depressing. I had decided to throw a Christmas Party and forgot to mention it to Frank. When he talked with a couple of his fishing buddies I ask if they were coming to the party. "What party" he asked. "OOPS!". Oh well, so this Saturday in order to bring more cheer and "normalcy" to the Kensinger - Fisher house, we are having our annual Christmas Party. It has been brought to my attention that this is a lot more work, but to me, it's really just a wonderful way to share the spirit of Christmas with friends and family. Add to all this,  the old Father Christmas that I won on Ebay that my father made back in 1987, which just arrived today! Never mind the fact that I already own about 12, this one is signed by my father and is one of the first ( #47) that he made.  Zack is even excited about it's arrival. I am finding that I am missing my father a lot this year. I think about how many times he would remind me that we are all "Gods perfect children" and would pray with me, with his hand on mine and his eyes closed, smiling with his kind smile, you could see the light around him just full of pure love. Today, this is the father I remember. I know he is here, watching over us all and laying his hand on mine to tell me everything is just fine.

I find that many people tell me they are thinking about me and Zack. I guess I don't talk about Frank a lot and how he is coping with all of this. Truth be told, I'm not sure. He has never been a talker, especially when it comes to emotions. Growing up he was "told" how "real men feel", so he was never given a chance to show his emotions. There are moments when he looks at Zack and you can tell he just wants to grab him and hug him, but then, as if his father is standing beside him dictating his behavior, he stands tall and says something like "you're doing great son", " it's going to be okay."  A couple of weeks ago, before the Hospital stay, Zack couldn't walk through the house, he was in so much pain from the blisters caused by the radiation. Frank stood up and at 5' 9" stood on his toes, grabbed his son by the neck and pulled his 6" 5" frame down to him so he could really hold him. He started to cry and tell Zack how sorry he was for what he is going through.  Zack mentioned to me last night how good a mood "dad" seemed to be in lately. I told him, it's because the radiation is done and he sees that "you" are okay. "Cool" was the response. Frank is the "silent" partner. He holds everything in, does not share with everyone he meets, does not write or share his emotions on Face Book or a blog, he does not confide in many people at all. He is a loner and at times I worry that he is not getting the extra support from others as I do. His mother passed on several years ago and that forever changed him. I wonder what she would say to him at this time when having our mother is so important. I don't know where I would be without mine. She is my strength!

Yesterday was a big day for Zack! Frank took him down to get his permanent drivers License. He had to drive with a restricted one for six months and yesterday was the day for him to get the restrictions of being a new driver, removed. He was worried they would make him take his hat off. He didn't want a picture of him without his hair (or hat). They were very gracious and said he could keep it on for the picture. I will post it when he gets his license in the mail in a couple of days.

Zack's counts were very low today, he usually is a 10 or on a really good count day an 11.  Today it was 7.1. Drake took off from school, I'm not sure I was happy with that arrangement, but Bill, his Dad said it was fine. He went with Zack to get his transfusion. It turned out to be a double. I know he will feel so much better once that kicks in. He called me from the cancer center and said they are trying to get his count back up before Chemo starts again next week. With radiation completed I'm sure his counts will continue to rise. Though I am still worried about it taking so long for his leg to heal. Another blister (large one) ruptured again today soaking his pant leg. They are now too large to put a bandage on so we coat them in the special cream they provided. He does have good news! I had made a request of the doctor for Zack to be down to one shot of Lovenox a day. The blood clot in his arm is now gone. Frank and I are 95%  sure it was a direct result of the surgery when they installed the port. Zack told us that he only has to have one shot in the mornings now. This will continue as long as he has the port. We are fine with that, better not to take chances. Zack is very pleased!! 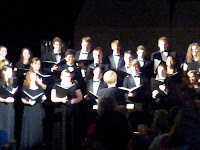 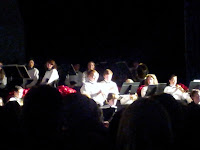 As I finish up the day, I see a note from my friend that the Christmas concert is tonight. Zack was in chorus and band, playing the saxophone a couple of years ago. Melanie's son (my other son and one of Zack's best friends) and daughter are playing tonight and Chris even has a solo! I ask if I could ride with them to the High School. Frank has to work late tonight on the indoor water feature at a local business and Zack is going to a meeting with friends at the school. I know neither of them are interested in going and I want to continue with my Holiday spirit.  I finish up at work and Mel and Brian arrive at 6:45 pm to pick me up. As I enter the school I am wondering why I came. All of a sudden I am sad, people are asking how Zack is, what are the details and saying, "I didn't know how bad it was." I put on my "happy face" and tell them "everything is fine!" ,"he is doing really well!", "it could be worse" go me the most unusual looks, I know most are being polite, some sincere. A couple of people mention having seen him and how different he looks. "He does?", Oh yea, no hair, eyebrows or eyelashes. "Yes, he does." As we sit down, the concert begins. I am filled with every kind of emotion. I am so proud of Chris and Katie. They are,  like Zack, all grown up and yet here we are at the High School, with such innocence too.  It is then that it hits me, Zack's innocence is gone. At least when it comes to knowing pain, real fear and having to face what I hope will be the biggest challenge of his life. These kids on stage in front of me are so young, At 52, I suddenly feel so old and tired.  There is a piano player, I swear I am looking at myself. I can't tell if it's a man or woman. Melanie just then texts me and says "Brian says the piano player is your long lost brother." "I know!" I freaked out, staring at this person, it could be me!! I have never seen anyone that I thought was me! Okay, now I'm really loosing it! No, wait , they saw it too! Okay, this night is just getting too weird.


The concert is over, I get to hug a few people on our way out the door. We laugh about the piano player, secretly, I'm still freaked out inside. I congratulate Chris and Katie on a great job! I am glad I went, it was something different to do and more memories. On my way home I call Mom. It's about 9 pm, so I am hoping I didn't wake her. I tell her about the concert, she asks if I'm okay, I realize, it really was hard to go. "Was I wrong to go?" Mom asks, "I don't think so, I'm not sure." I start to cry and need to hang up. I don't want to upset Mom, though I know she can tell.

I agree to meet her tomorrow for "party" shopping. It will be good to be able to give her a hug. I miss our normal routine of Tuesday shopping trips. I enter the house, Frank is sound asleep on the couch, but carrying on a full conversation with me. It's always hilarious when he does that. Zack is in his room, playing on his computer and getting ready for bed. I offer for him to go with me to Hendersonville, but he says he is going to get his school work done. He also has a meeting tomorrow to turn some of it in to his teacher. He had a good time with the guys tonight, is tired and ready to go to bed. I share about the concert with him, but he has "been there done that too!" We say good night.

I guess down deep a part of me wanted to bring back the innocence of the past. But we already know, we can't go back.