Today was a somber day. I awoke at 6:30 am ready to tackle the business bookkeeping. I have been stalling long enough and it's time to get it done. Zack wakes with more energy, a direct result of the double blood transfusion yesterday. He is excited about going to "the farm"-  four wheeling with his friends this weekend and we did everything in our power to ensure that could happen.

Frank was planning on going fishing this morning with his new gear, but flooding has made that impossible. He takes his time waking up and is pretty quiet most of the morning. A father and son have a different relationship that a father - daughter. I can't even pretend to know what he is feeling with his Dad's passing. I know he was devastated with his Moms. We were scheduled to gather at the small chapel at the local funeral home to say goodbye to"Big John" Fisher. Everyone is to meet at 1:30 with the service at 2 pm.

I finish up the bookkeeping feeling a major sense of accomplishment. Though I am off from work until next Wednesday, being the OCD personality that I am, I have a list and a schedule and nothing is going to stand in my way of finishing everything on my list. Zack has been running around from one parts store to another trying to locate the right part to fix his truck before the weekend. Frank and he made the necessary repairs and then we all start to get ready for the service.

On the way back home from the Cancer Center yesterday, we had purchased a couple of pairs of new pants and dress shirt for Zack. I am so tired of seeing him in those t-shirts with the arms cut out, but that is the only shirt that works when the nurses need to access his port for treatments. I tease and call them the "Port shirts". Zack comes out of his room all dressed up looking rather dapper! (He wouldn't let me take his picture) . He heads out before us so that he isn't in the middle of all the people. Frank and I head out and as we pull into the parking lot, cars are parking all around us and people are walking up the steep hill to the chapel. We walk past the line of quests signing the book, hugging a few as we walk past. My mission right now is to get inside and make sure that Zack is somewhere safe and protected from all the handshakes and hugs. I find that he in fact is, surrounded by family and it seems that they are protecting him.

As we all find our seats, John's wife, Linda, her son Billy, Frank, Jamie, Mitch and Shawn all sat in the front row.  I had been told when we arrived that the children were going to sit in the front, of course we all had to laugh later, when I shared that I had told the "children... AKA grandchildren" to sit up front. I just never think of Frank and his siblings as the "children". The "in-laws" sat in the next seat and grand kids in next...etc.. A local Baptist Minister officiated, he did a wonder job, though my personal belief is different than what was preached , having had the pleasure to know the minister, he is a kind man and has always been there for the members of our community. The minister had also been asked by John, before his passing, to sing a song called "Lord, build me a cabin in glory" which was originally sung by Charlie Pride years ago (a Country singer). He sang it acapella and did a fantastic job considering he never heard it before.  Mitch stood and spoke on how his father raised them and shared a couple of stories and then Shawn read a poem that their father had written, sealed in an envelope and put in his safe marked "To be read at my funeral". (I will share it when I obtain a copy) It was a beautiful poem and spoke of where he hopes he will be when he passes, (actually a cabin overlooking the hills, I'm sensing a theme here). I do hope that he is in that place of peace, he had suffered for way too many years and he made it impossible for anyone to take care of him. The family had requested a color guard, as John had served (during peace times) in the Marines. The younger serviceman and servicewoman unfolded and refolded the flag, it was then presented to Linda along with documents and a Thank you for John's years of service. This was followed by a three gun salute (caught me off guard... pardon the pun) and the trumpet playing "Taps". When they presented Linda with the flag is when I teared up, it was beautiful and I couldn't help but think how special it is that Mom worked so hard to ensure we were born in the US. When the service was over, in honor of Johns love of hunting, all us "children" put on camouflage hats. Those that knew him well fully understood our meaning.

We lined up to accept the guests and thank them for coming. Zack had spotted two people in particular, our old neighbors Garfield and Frances. He wanted to stay long enough to say hello to them and standing behind me, didn't shake or hug anyone until they came. They assured us they were not sick and right after saying hello to them, he left to return home. The turnout would have made John proud, the chapel was full , with friends, acquaintances from Dupont (where he worked for 33+ years) and family members. Everything had wrapped up in about two hours.  Floyd  (brother in law) and I went across to the offices to pick up the photos we had dropped off, Frank then went and was given his fathers remains. We will keep his remains with us until a decision is made as to where his final resting place will be.

As we were all leaving the chapel, we were invited to Shawn and Floyd's house for dinner. Their church had offered to bring us all dinner and though we were ready to go home, it was a nice way to end the "ceremony".  Zack handled everything so well. He came home and is now preparing for his big weekend. The fun part is, the four wheeler was a gift from Papaw, so he will in fact, be honoring him, which is exactly what John would have wanted him to do. 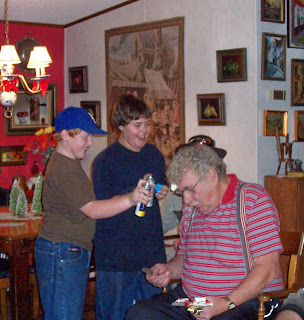 Zack and Darrick having fun with Papaw