The many faces of Courage!!!

We all wake up as if it's a usual working day. 6:30 am comes early when you are snuggled warm in your bed and it's your day "off" from work. I manage to crawl to the shower, get dressed and wake up the boys. Donald is not an easy child to wake up, so I threaten to leave him if he isn't ready. Zack, having been in a horrible mood last night, woke up cheerful and loving. He even managed to give me an unsolicited hug, a real treat coming from a 17 year old! Donald, who doesn't believe in coats, walks out to the car wrapped up in Zack's old blue quilt. Little did I know, what an effect that quilt would have on my immediate future.

We arrive at the Cancer Center just in time for labs. Zack, as it turns out, needed a double blood transfusion and platelets. His counts were down very low and this would guarantee a good weekend for him. He had started having headaches the night before, usually a clear sign that he would need something. Both boys were in a great state of mind. They were actually hilarious all day, telling jokes, making fun of games, pictures, pretty much anything they could get away with, they did. We had a couple of hours before the blood would arrive, so the nurses told us to just head out and do something fun. We couldn't go where there were large crowds, so we decided to go to the local Habitat thrift store. There was a lot of open space, so we felt safe going there. All the way there and back to the Center, the boys were talking about all the good looking girls there were in town, how they were going to move there, because of all the pretty girls. Let's just say, hormones were ragging!! It was actually quite fun to have them, especially Zack in such a good mood. During the course of the day, the nurses even mentioned what a good mood he was in and how he is usually angry when he has to get blood.

During the day, there are phone calls back and forth with Nancy and Steve, who are working none stop with Sue on a fund raiser to be held April 20th. With each phone call, we are all getting more and more excited! Three bands are volunteering their time and Steve is going to cook BBQ along with several friends from our former Boy Scout days. The Bishop Brothers have been friends of Franks and his brothers since childhood and to have them come and volunteer their time touches our hearts, as well as the other two bands, which I can't wait to see and Thank personally! I see it as a community of friends and family coming together under one roof, to celebrate the long road Zack has traveled. Everything looks so professionally done and we feel so lucky to have friends willing to take so much of their time to put this together. It has been weekly and now almost daily in person and phone meetings between Nancy and Sue as they organize the event. I remember when Nancy first told me she didn't know a thing about fund raising, now I think she has become an expert. To witness my two dear friends working together effortlessly as if they have done this their entire lives it amazing!  I showed the poster to everyone at the Cancer Center and they asked if a professional designed the poster!!! I was beaming!

Towards the end of the day, I take a two hour nap and am later teased by Donald that I am a rather loud snorer!! I simply laugh and agree! We were finished by 5 pm and since we were all ready to have some fun, we went to the Salvation Army Thrift store (per Zacks request) and Target, where I could get a lamp to replace the one that Sidi had broken, the boys also wanted to look at some games and music. We then grabbed dinner and that's when the day took an unexpected turn. While having dinner I received a call from my brother, Bob, who's dog, Courage, was in bad shape. She had gotten worse since Thursday's trip to the vet and now, we were advised to bring her into the emergency hospital for hydration and to see if strong IV antibiotics would turn her around. I arranged for Frank to meet us half way and pick up the boys so that I could go straight to Moms and then the Vet.

I arrive to a very shook up Mom and sad Bob, who carries Courage out to my car. I had kept the blue quilt to cover the back seat and later to carry her into the emergency clinic. Mom offered to go, but there is no need. I have been down this road many times and though it isn't easy, knew I could handle the situation on my own. Once I arrive, they are expecting us, so I immediately carry her into the small office. The Dr. advised to keep her on fluids and IV antibiotics over night and see how she is this time tomorrow. So, a couple of hours later I am on my way home, reporting back to Bob for the last time tonight. 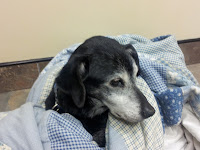 I awake around 9:30 am Saturday morning to a couple of missed phone calls. Steve called and needed my help to set up my paypal account to accept online donations for the fund raiser. Several of our friends from Europe and around the Country had asked how they could donate and though I feel weird accepting anything from anyone, they are adamant, so he gets that all set up on the website www.zacksfundraiser.com. The other calls were from the Vet. So, I hit the ground running, so to speak. The vet has determined that Courage got worse through the night and was unable to keep anything in her system. He took her off of the fluids and was keeping her comfortable until I could arrive. My brother had made the decision that it was time to let her go, she was not in pain, but her quality of life was gone. He didn't want me to "have" to be there, that's when I pretty much told him "I know I don't HAVE to, I WANT to be there for her and you." I arrive  at the emergency center around 11:30 and they are expecting me. The Dr. comes in carrying Courage in the blue quilt and spreads it out on the floor. He and I sit on the floor as if we were having a picnic with her. For an hour, we just sat there talking to her, petting her as she lay in the sun and share our favorite animal tales. He and his wife just had to put down their dog a couple of weeks ago, so he was still fresh from that pain. We talked about Zack and the similarities in the counts he was giving me for Courage, how weird it was that I understood what he was talking about. He shared his mothers journey surviving breast cancer and how strong Zack must be to handle everything at his age. It was then, that I told him it was time for Courage to go and be at peace. As I held her sweet head in my hands, he administered anesthesia and she was sound asleep, passing quickly and peacefully. Crying I looked at the Dr. and said, "You know, I haven't worn mascara in a year, because the days I put it on I end up crying....I'm so tired of crying!" He gave me a big hug and said how sorry he was. The nurse came out with some of Courage's hair tied in a blue ribbon and a paw print in clay marked with her name and the year. This is their way of offering their condolences.

I bring the hair and paw print to Bob and grab Mom up to get her out of the house for a couple of hours. She is shaken and sad, as of course is Bob. I know he needs some time alone to deal with his loss and Mom, who has been hand feeding, cooking and helping with her care just needs to get out. We have a nice lunch, go to a couple of thrift stores and I bring her back home. She now feels that she will be better able to rest and has promised to engross herself in one of her movies. Bob is sound asleep (he didn't sleep at all the past few nights), so I gently give him a kiss and head back home. 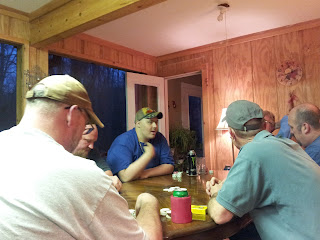 We are expected at our friends house Steve (Wall) and his wife Karen Ann for dinner and poker tonight, so I take a short nap when I arrive home. Zack is outside putting new brake pads and shoes on his truck as well as changing the oil. He had mentioned to me this morning that he was tired, but when I told him to take the day to rest, he said "Mom, I'm 5,000 miles past my oil change!!" His great grandfather would be pleased (he believed in changing the oil every 3,000 miles without exception).

We arrive at Steve and Karen Ann's place in Hendersonville and imagine my surprise when no women are there!! Zack joined us as well, so since there were too many players I told Zack to sit in and play with "the big boys". He had a great time and his Uncle Mitch took the time to help him out when he wasn't clear on how to play. I bundled up in a corner recliner playing my video game and later watching 24 on my phone. I was quite content listening to the guys laughing and including Zack in on their conversations. They enjoyed having him there and he got quite the education in poker playing. It was actually nice to sit in a corner, relax and listen to the teasing in the other room. Around 10:30 pm, I decided to head out and have Zack bring Frank home in the Bumble Bee. It was kind of "sneaky" on my part. I was worried about Zack driving home alone at that hour, so how better to have my cake and eat it too!!! They arrived home within thirty minutes and Zack is again gone, this time to spend the night at Drake's house. He hasn't been there in a couple of weeks, so I'm glad he is able to continue with his normal activities. Next week Tuesday, we start another round of chemo if his counts are good, and this is the nasty stuff that tends to really make him sick, so I want him to enjoy himself as much as possible.

I will end today's blog with something I heard on a TV special, it may sound weird, but I feel it is so true!
" As you live your life, it appears to be anarchy and chaos and random acts of non related events smashing into you and you wonder what in the world is going on! Later in life, when you look back, it all comes together, like a finely crafted novel and it all makes sense. "(author unknown).
Posted by Unknown at 12:09 AM