It's a beautiful day in the neighborhood!

If there is one thing we have learned with this treatment is that each day is a new "normal". Each day Zack's emotions and physical stature change. As fast as he is sick, he is again well. We too are up and down with his moods, either being his cheerleaders, caregivers or sounding boards. Whatever his needs, we are up to the task.

Frank and I start the day with our usual hustle and bustle. I head out to work at 6:30 am with the idea that Zack will call me if he needs me to return home (a ten minute drive at most) at 9 am to give him another shot. He told us last night that he could handle it himself, but since he is so new to this (like I've been doing it for years?) I wanted to make sure he knew he had backup. Frank heads out next, he too is a big anxious about the shot, but also understands Zack's need to be independent.

It is 8:30 am, I call Zack to make sure he is awake enough to give himself the shot. I had woken him up, He assures me he can take care of it himself, I tell him to call me as soon as he is done. I am concentrating on my work, but in the back of my head I'm waiting for the phone to ring. Millions (maybe billions) of people give themselves shots daily for diabetes, blood clots, etc... But this is my 16 year old son, who up to now has been healthy and taken nothing more than a Tylenol for a headache. Two minutes after 9, the phone rings, it's Zack telling me he did it! He is not thrilled at the idea of sticking a needle in his belly, but you can tell he was proud. I asked how it went and he says "it stung for a second and hurts when putting the medicine in and for about five minutes after." Once we hang up the phone, it hits me. I sneak into the exam room, grab a box of kleenex and have a good cry, Within minutes I stop the crying, wipe my face and head back out to greet our patients. 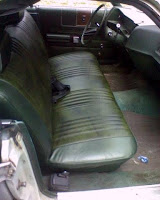 It is lunch time and Zack calls asking if he can borrow my car (I knew I should have put on the carlashes... eye lashes for the car), he will bring me Franks Dodge truck since it is easier for him to drive an automatic instead of stick. He wants to get lunch and then go to Floyd's to bring him the keys to his Galaxie. I had called Floyd and asked if he (since Zack has to really watch out for cuts due to being on the blood thinner) could look at his car and determine what needs to be fixed to get it on the road. I tell him this is not a favor, I don't want any BS, I am serious  We will pay and don't want him to argue with me about that. Business is business! He laughs and says OKAY! He offers to look at it and if need be can find someone to make the necessary repairs. It's a deal!! He then tells me that what he is about to share must NOT be blabbed!!! I say "oh I'm good at blabbing", he said "then I'm NOT telling you!" I tease and say "OH you DON'T want me to blab!" "EXACTLY" he says... so... "We decided to take the front seat out of Zack's car, take the upholstery and bring it to Hendersonville to have it covered." He continues, "we got the seat back, put it in the car and when Zack comes today I'm going to tell him someone broke into his car" "It's an early Birthday present for him". I promise not to say a word. Zack heads over there and (in Zack's words) he looked inside the car to see what was "taken", saw the new seat cover and just kept saying "WOW, WOW, WOW, OH WOW".... He was so excited he was floating. He still is! He returns home and meets with our neighbor whom has promised to help with his Senior project. They were going to re build a motor, but instead he is asked if it's okay for them to paint his car! Zack is so excited he can't stand it! That is still heading to his future in automotive, but if he could get his car painted at the same time, we would buy paint and supplies and he could learn how to do the work.

He picks me up at work, asks if I got the text with the picture and proceeds to tell me about his day. He says his arm is feeling better, we allow him to go to a friends house for a couple of hours with the understanding that he is home by 8:30 for his next shot. At 8:15 he walks in the door. Frank asks if he could give him the shot, he teases and says he would have fun sticking a needle in Zack. Zack looks at him and says "NO!!" but I'll show you how I do it myself. So at 9 pm ( doses are every 12 hours) he lays on our bed, cleans the skin with alcohol and sticks the needle in his belly. He checks to make sure it is not in the muscle and slowly puts in the medicine. To think two days ago, we never even knew about this stuff!

Frank is impressed, tells Zack how proud he is of how he is handling everything and goes to sit on couch to fall asleep to his favorite show (hey it's a long day for him too!). Zack and I decide to tackle more of his room and as I start to put out his childhood nicknacks , he is setting up his stereo record player that was Grandpa's. He is so proud of receiving that as a gift along with many records.  I hang out with him until about 10 and then melt into bed to write my blog. He comes in and is reading over my shoulder. "Hey Mom, you got all this pretty much accurate, good job!" Hey if He's Happy with it, so am I!

All in all a great day filled with many blessings!