Today we attended a  meeting with the Principal of Brevard Senior High School and about 100 other parents. The purpose was to introduce the Chromebook to us. All of the students will be getting one this year and we had to attend this meeting to understand the importance of what "we" were being given. Okay, I'll go with that! Even though Zack will not be physically attending class, he will still get to use this.

They will have access to everyone's email address, be able to interact with other students in the same classes, have "most" of their books on the "cloud" system instead of having to carry around all of the books (this is a work in progress).

I got Zack signed up for one and we should be able to pick it up next week when school starts (hopefully sooner, since he goes into the Hospital on Monday for the week). By then we should also have his schedule down and know when , where and what he will be doing. 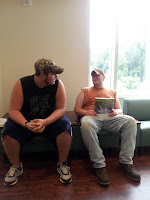 Drake (one of Zack's very dear friends and one of my  "other sons".. I have many !) Zack and I left the school and headed straight to Asheville Cancer Center for his treatment. Today he had the Vincristine . This is the one that will cause him to loose his hair. We had a new nurse (will give her a second chance at first impression). She had problems getting the IV into the port, asked me to go down the hall and get one of the other nurses to help, I run down the hall ( as Zack hollers, "Mom its not an emergency") so, true Sabrina form, I continue down the hall, see the nurses and say "Code, non emergency, I'm not panicking, but if you could come right now a nurse needs help" then .... as I'm laughing and they are running to me "Code... Melanie..  oh Melanie... we need you... come here and help us please!" I hear Zack laughing down the hall, MOM it's OK, they can come slowly.. The nurses roll their eyes, they said "we will take care of him", I don't know what is going on, if this is a new nurse or what, but... she was trying her best and today it was rough. They managed to get the IV in, and then Julie (new nurse) takes the saline solution and whoosh.. puts it in too fast, Drake and I looked at each other as we saw the color leave Zack immediately. Drake asked Zack if he was alright, I said freaky!! and Zack stood up to go to the restroom. While we were walking down the hall he blacked out for a moment and almost started to fall! I was trying to figure out how the hell I was going to hold this kid up, let alone pick him up off the floor. But he was fine within a minute of hugging the counter and pushed me away, saying he was fine. Yes, I know, we are all "fine".... I get it! Mr. Macho Man!

We are moved to another room, closer to the nurses station (closer to Angie and Melanie). Julie walks in and checks Zack's pressure. Then Dr. Beatty comes in. This is the first time we are meeting him. He is an older man, with kind eyes. He worked at St. Judes for many years, so he is very familiar with children s cancer. He checks Zack's ears, chest and then proceeds to test his reflexes. First the left knee, then the right, perfect, then he tells him to make a loose first and taps him in the elbow.. immediately the middle finger comes up, we all start to laugh (including Zack), the Doctor says, "well that won't be the last time you give me the finger". I like this guy already! . He asks Zack is there is anything he can do for him today, "besides take all of his hair", we again laugh! Zack tells him that he doesn't like his current anti nausea medicine and would like it changed. Done! said the Doctor, he tells Zack he doesn't know too many people who can handle that particular medicine. So we are changed from Zofran to Kytril which should have less side effects.  I'm so proud of how he has taken the initiative in his own care. He is learning a lot (maybe too much?) and KNOWS what he does and doesn't want. After about an hour or so we left there. I told the "boys" If I was going to do this, I wanted to see a thrift store on the way out of town, so we went to Habitat and checked everything out. Zack found four "Alabama" records, don't ask, I won't tell, LOL and we headed out for lunch. We tried to get steaks, Zack's favorite, but they were closed, so we went to Five Guys hamburger place. Had a very noisy lunch (men working on the road right outside the restaurant) and decided to go to Hendersonville to visit Meme (Mom).

By the time we got to Meme's house, Zack was starting to feel bad again. I think the combo of the saline, Vincristine and then eating so soon after didn't agree with him. We stayed at Mom's, maybe a hour, if that long and Zack told me he needed to go home. It was so hard to leave after being there so little, but right now I have to follow what he needs, not what I want!! We gave hugs to Bob and Mom and were on the road home.

While on the way home I called headquarters of our local grocery store. Yesterday Zack had "tried" to return a phone charger that wasn't working. He had the receipt and the charger. The Assistant manager said that she couldn't give him the money unless she had his "moms" debit card and store discount card as proof of purchase. He said " you have the receipt, my mom is the one that sent me here", she said "well, there's nothing else I can do for you then is there!". He left and called me. I called her and asked what was going on, she said "without your debit and discount card I couldn't give him a refund , it's store policy!" I said "are you kidding me!" We have the receipt? "she said , well then just send your son back and I'll give him the money if I have to!" Now you see why I called headquarters. I talked to the district manager, who offers his apologies, I tell him that I have since returned the item myself to another store and nothing was mentioned about needing anything else. She looked at my receipt and gave me cash back. He said "what can I do to make this better", he said he wanted her to call and apologize to me, I said NO, she owes my SON an apology, she treated him like a thief and I'm tired of teenagers being treated like crap! So.. he offers to send me a $50.00 gift card and had her call and apologize to Zack. Her apology was more of a "mean, you got me in trouble call", and I let him know of that when he checked back in, but told him it was over and we have better things to do than to talk to nasty people. He apologized to Zack and said he was glad we had called him. He then gave us his cell phone number if anything every happens again. Pretty cool!

I was a fighter before. I have always fought for what I believed in for me or anyone out there not getting justice, but somehow the fight is stronger now than ever. The Mama Bear is awake and won't be in hibernation any time soon. 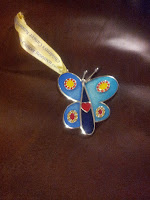 Zack is now feeling better (several hours later) and is resting in his room listening to his new records on his record player he inherited from Grandpa. In the mail is a cute little package from our dear friends ( and Zack's "other" mother and  father) Melanie and Brian Long. In the package was a beautiful blue butterfly as part of a donation to the Children's Cancer Research Fund, a gift certificate for one hour massage (mine mine mine mine mine...) and an amazon gift card for Zack to buy music for his MP3.

We just got another call about Franks Dad. He was admitted into Mission Hospital (where Zack will be next week). We're not sure what is going on, but we see the end of his journey coming soon. Having said that, he does have more lives than a cat, and we will keep him around as long as he wants to be here!

Now I'm off to rest, I want to be 100 % at work tomorrow and Thursday. Friday will be lab work. Zack will go pick up the car tomorrow (which of course Meme knows about because of my big mouth Blog!!) so he is excited and we will have the weekend to rest up for next week.