It is 8:30 am on Saturday, Aug. 18th, Zack and I both start to wake. The Ativan (Lorazepam) given last night really knocked Zack out so he was able to sleep well most of the night. He woke about three times to use the rest room and didn't even remember. The breakfast tray is again waiting for him, this morning it is scrambled eggs and bacon with a  biscuit already soggy from sitting. Zack is "loopy", our new terminology for him after a dose of this medicine. The Ativan and Decadron (sp) helps keep the nauseousness down but also makes him sleep a lot and kind of leaves him "stoned", not an appropriate term for a teenager, but lets call a spade a spade. He wakes up slowly, I try to get him to eat something so I offer to heat up his food in the microwave and he is receptive. I walk down the hall to the "parents closet". If not previously mentioned, there is a small room for parents containing a small refrigerator, microwave and coffee / espresso maker. If we need to store food, we mark it with our last name and room number. They say that a lot of people bring small refrigerators to the rooms, but we figured out that we really didn't need that.

When I return with the heated meal, Zack sits up and proceeds to devour it. His appetite has been off quite a bit which is to be expected, so it's nice to see him eat a bit. He all of a sudden is eager to get some donuts. I call "Tante", Aunt in Flemish (Rhonda) who has been eager to help and ask if she is up for a donut run. Rhonda says she knows where a Dunkin Donuts is and of course Zack says "NO!!! we need CC. Spoiled much? We ask Melissa (our day nurse) if she knows where a Crispie Creme is and she gives directions. We tell Rhonda to pick up chocolate covered custard filled and kruellers (which are Zacks favorites). She calls from the store and they tell her they haven't make krueller's in two years? (weird.. he get them at the store), so she gets something the young lady says are very similar. Rhonda as always is eager to please.  Zack and I decide to go walk around the Hospital for a little exercise. He is weak from being in the bed so much, so we get permission from his doctor to go downstairs to the vending area and pick up a couple of coffee's. Any excuse to get him out and walking around a bit. By the time we return to the room,  Rhonda walks in , opens the big box and there right in front of us are the chocolate covered sugar filled ( thick rich white blob). "Oh man" we all say pretty much in unison, "I'll be right back", and out the door she goes again, returning within the hour with a bakers dozen of the right donuts. By this time, Zack is feeling sick again and can only look at them. We know they won't go to waste and he will be able to have one later when he feels better. 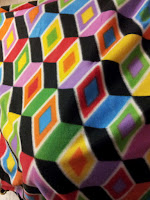 Rhonda stays for a couple of hours, just hanging out with us. Zack gets up to use the restroom (don't forget he is being pumped with IV fluids all day and night to flush out his system and keep him hydrated). While he is up I decide to change his sheets, pillow cases and blankets. He mentions the "bad" smells often. His sense of smell is increased and the only smell he likes right now is one of the air fresheners I bought for in the room. He was given a gift from "Linus" a group that makes colorful blankets to hand to Cancer patients. His is full of so many bright colors, is ultra soft with fringes all around it. 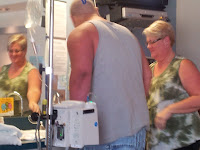 After the bed is made, I encourage him to wash up. He isn't allowed to take a shower due to the IV being hooked up all the time, so I bought fresh wipes and non water shampoo. I proceed to spray his hair with the shampoo and he breathes in the fumes. NOT my best moment in being "motherly". He washes his hair and already says he feels better, though he can't wait to get home and take a shower. Rhonda decides to head out, work on her apartment a bit and get ready for a concert she is attending tonight. Tomorrow she spends the day with Mom, taking her grocery shopping and having some mother - daughter time together. Jealous? you bet!!! But my place is with Zack, Mom and I have had many days together and next Friday is our time again.

Today I can stay in the room all day, no more need for running errands, just sit and hang out with my buddy. Melissa checks in on us frequently. She heard about the rough evening Zack had and is trying to figure out what is causing him to shake and feel like his insides are "hot" after treatment. I always like it when I talk with someone and they look me in the eyes and take the time to listen. That's Melissa. She makes you feel as if you are the only patient and family in her charge. Let's face it, they are not caring for only the patient, they "care" for us too. Melissa teases us about our banter back and forth. She has realized after this short time, that Zack's mother is a lunatic.

Zack and I are watching comedies, movies and anything else that can help pass the time. I fall asleep for about an hour or so in the rocking chair and wake up a bit more refreshed. Zack hasn't slept during the day today, so maybe he will sleep better tonight. I was hoping a couple of his friends could make it to see him today, but they too have their lives to live and it's hard to see your friend in this shape.

It is 4 pm and time for the final treatment of the week. Melissa mentions the Chinese food the front desk nurses ordered, Zack and I look at each other and ask if they deliver to the Hospital. She says "oh yes" Chinese, Pizza . She runs down the hall and returns a few minutes later with a printed out menu. Zack says he is tired of Hospital food so we order a Pu Pu plate for him and chicken for me. Of course I have to tease him that now he is eating pu pu... he is not amused, but does actually manage a smile and tells me I'm lame.

I walk down the hall to call and check in with Mom. I pass Chris (Vin Diesel look alike), he stops me and with a smile says "I hear you think I look like Vin Diesel", I laugh and say "someone's been talking and tell him yes" he says "Thanks, I take that as a compliment, he seems like a nice guy" I tell him that I wanted Zack to tell Make a Wish that he wanted to meet Vin, but he wouldn't go for it. He then tells me of a young girl in Atlanta that had a "date" with Vin as her wish, he picked her up in a limo to take her to a nice restaurant and she wanted grits, so they drove around until they found a waffle house that served grits. How cool is that!

I return to the room and tell Melissa what Chris said, she laughs and says "oh yea, we are reading your blog, I like the way your write, it's pretty cool to see this through someone else's eyes." I am of course flattered. Zack is doing well with today's treatment, though he still has the shakes. He is given a smaller dose of Ativan but still acts "loopy". Melissa decides that is probably not the best medicine for him. She tells us that some patients can hallucinate from this medicine, Zack (with his sense of humor) looks at the ceiling as if he sees flying butterflies or something.  Melissa and I crack up! It is so good to see him when he is funny. His mood has been so heavy this week, it will be nice to get him back home.

There is a knock on the door. I open it and there stands a man with our dinner. I tell him to come in and join the party. He looks at Zack and says "Hey man, Rock it"!  I "of course" tell him Zack is undergoing chemo and he shares his story of several family members going through that as well. He looks at Zack, wishes him the best and leaves. Melissa finishes up Zack's treatment and makes sure he is good to go for the night. She is ready to head home and wishes us the best for the coming weeks. I don't know how they can keep their energy up for the shifts they work, but she was just as sweet and attentive as she was firs thing this morning. We are blessed with the care. We KNOW we will see her again as this is only the first in a series of weeks in the hospital through the coming year. 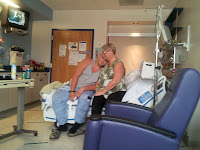 It is 8 pm, Zack and I are watching a funny movie. He asks me to sit in the chair next to him. He is again my little boy and wants his Mom close to him. He doesn't like the way this medicine makes him feel and is worried. I go online and look up the side effects and read them to him. He all of a sudden realizes this is "normal" and relaxes a bit more. Liz, our night shift nurse walks in and introduces herself.  She is aware of the issues he has been having and says that she, Melissa and the Doctor agree to give him the smallest dose, since he has hardly ever had any medicine in his life, it doesn't take as much. Zack and I hear "Nurse Janice" over the intercom, she has a reputation for following the rules to the letter and has announced that it is time for all visitors to leave. Zack and I laugh and say "there's nurse Janice"  Liz says "oh no that's Tamara", I say "NO WAY!!" Tamara doesn't seem to be the "type" we laugh and I mention I'm going to have to tease Tamara when I next see her.  It has been five days and we already feel like we are have an additional family. I don't see how anyone can go through this and not form some kind of connections with the caregivers that surround them.

Hopefully tomorrow we are out of here by 2 pm. Melissa told us the Doctor already filled out a lot of  the paperwork, has a prescription ready and once he receives the right amount of liquids and they check his white blood cell count, we will be free to leave. Zack is excited, he will be home, close to his friends, in his newly remodeled room and be free of treatment for one week. (we still have to get his Neulasta shot and lab work done on Tuesday, but nothing that will make him sick). I will sleep in my own bed, see my hubby again, have my own TV shows, clean clothes and be able to "nest" in Zack's room to finish setting it all up.