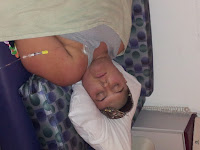 Well an interesting couple of days. It is Thursday and I arrived back at the hospital around 8 pm after work, grabbing dinner from Boston Market for both Zack and I. He is asleep, which was the case for most of the day. I look at him and can't believe my eyes. His face is so swollen, even his lips were like "Angelina Jolie lips"  Never in all the treatments have I seen this. I am concerned so I call the nurse, she comes down and takes a look. She agrees he is retaining fluids. She calls the Doctor, who then explains that having had four units of blood and constant IV fluids for the past three days, is usual for some retention. He tells the nurse to keep an eye on Zack and if his ankles or hands swell, they would go ahead and give him a water pill, but it is better for him to keep it at this time, this is what helps to coat the kidney and bladder to protect them from the treatment.

I get settled in, unpack my clothes for the next couple of days and sit in the rocking chair. Within thirty minutes he wakes up, almost with a bounce. "Hey Mom, check out the trucks I've found." He shows me several trucks he located on the internet, I give it a quick glance and then show him the chicken pot pie I brought for him. He sits up,  He grabs the pie and devours about three quarters of it. He tells me about the ambulance ride over to the radiation department at the clinic across the street. He said they strapped him in the gurney and drive him over. He is marked from the low back, down the legs with magic marker. This is to set up exactly where they are going to do the radiation. Our biggest surprise? He is having this every day (Mon - Fri) for five - six weeks AND still continues with the chemotherapy at the same time. We had understood that it would be one or the other, never at the same time. When speaking with Dr. S. the information was confirmed. The reason the radiation is necessary is the same for the chemo. There could still be some unseen particles that need to be zapped!

We both finish dinner, then Zack says he is still hungry. I offer my leftover sushi from lunch and he also devours an entire roll. It was so good to see him eat. He is not as nauseous this time around. They have found the perfect balance of medicine to keep it at bay. Being tired I give him a big hug and kiss (yup, he still "allows" me to do so)  He is tired as well, so we both agree to catch up more in the morning. Within minutes he is sound asleep, I on the other hand can't fall asleep and at 12:30 am the nurse comes in asking why I'm still awake. "A lot on my brain, I guess," is the only answer that makes sense. Of course there are times when I am so tired I can't even fall asleep. Maybe it makes sense, maybe not.

Friday morning we wake up around 8:30 am. Zack was up most of the night using the bathroom, his swelling is down quite a bit but still not back to normal. I jump in the shower and get dressed. My plan is to go to Walmart and get my hair cut again, even though the young lady returned to Pennsylvania until Christmas, I will just have to take my chances with whomever is there today. While getting ready, Zack comes out of the bathroom and says "Mom, I'm leaking!" His t-shirt has fluid on it and it's coming from his port. THIS is NOT GOOD!!! I hit the call button for the nurse and tell her to come immediately. He then looks at me and says "Mom, it's BURNING!" Although we know that currently he is getting saline solution so there is no danger, this must be addressed immediately. I run down the hall and am greeted half way by his nurse, outside our door is Dr. S. so I drag him in as well and tell him what is going on. He is so calm and says "okay we need to see what's going on" within seconds it is determined that the needle that access' the port is loose and fluid is going into his chest around the port. The nurse runs down the hall to get a kit for a new access needle and returns, another nurse enters to help. they notice that a saline solution is missing from the kit (a new money saving idea which they are not in agreement with). They get everything needed and within fifteen minutes he has a new needle in the port. It did hurt this time, because of the fluid retention and fluid surrounding the port. Being the tough kid that he is, he simply winced, looked up at us and said "yup, doesn't feel too good right now!" Thankfully, It didn't take long for the pain to go away, he was hooked back up to the IV fluids and laid back down.

Once I determined he was okay, I made a breakfast run for us both. His breakfast had arrived and consisted of a single bagel with cream cheese on the side with one sausage link. Even I said I wouldn't eat that. I had decided to stop at Biltmore House to see Rhonda, who was working. After a few minutes catching up with her, I headed back to the hospital. Zack was sitting up looking at the computer for more trucks. We sit down to eat breakfast and then proceed to watch tv and play games on our cell phones / lap top. The nurse comes in and tells us they will start the next round of chemo at 2 pm. I then decide to go ahead and run to Walmart for my haircut and some supplies. Zack tells me he is going to sleep so this is the perfect time to head out.

I arrive at Walmart and there is a young man cutting hair. He tells me it will be about ten minutes, so I walk around the store for a bit, I can't believe that I'm allowing a perfect stranger to cut my hair. For twenty or so years Teresa has been my stylist. This is more proof of how you simple adjust to life's situations as they come. It's just a hair cut, I have my hair, my son doesn't so who am I to be vain at this time?  The young man does a good job (not great) and is very nice. I walk around and all of a sudden I hear this man yelling, I turn and he is heading towards me with a coloring book and yelling "something" obscene though I can't decipher his exact words and won't go into details about the ones I could understand. I walk down the next aisle and there he is again, this happened three more times until he finally disappeared into the wild blue yonder. I decide to stop and post on Face Book about my experience, somehow when I'm alone I feel as if someone is sharing with me when I post on FB.  I continue with my shopping, grab a couple of drinks and snacks (no not the hard stuff, though at this stage of the game it sounds pretty good) , pick up lunch and am on my way back within two hours.

The swelling is down even more when I return and Zack is again hungry. We eat lunch (hey what else is there to do but eat?) and settle back again to talking, playing games and Zack sleeping some more. I asked Zack when I came in if they are ready to do the chemo, he laughs and says "Mom, I'm having it right now, they have already started!". "OH, they were supposed to start at two", "They started it early". What this means to us is the earlier in the day they give him the treatment, means the earlier he can leave on "exit day".  Around 6 pm, there is a knock on the door and there is Drake, Amy and Bill with little baby Landon ,(Bill and Amy's grandbaby and Drakes nephew who is almost two months old. My face glows!!! A BABY!!!! Amy announces that she knew this is what I would love!! and was she ever right. (of course I love babies, as long as they go home with someone else, been there done that!) While they were visiting Rhonda stops by on her way out of town to see my nephew Jim race in a triathlon in Chapel Hill.  She brings Zack some pumpkin bread, visits for a few minutes and then must leave in order to make it there in time. It was nice to see her twice today. She has been really helping take care of Mom and Bob's needs which makes it so much easier for me not to worry as much. Though mind you, I miss Mom, Bob and me time too!! Our extended family left (it was determined ... by Bill of course... that I too would be "grandma"to the new addition, though I insisted on being called Bree Bree (Amy is Meme), pronounced just as written. I tried to get away with great aunt, but was overruled!

I ran down to the cafeteria for some dinner and headed back up just as quickly. Zack was starting to feel bad again and I didn't want to leave him alone. When I returned his stomach was hurting him, but he didn't know if he was hungry or what was going on. He didn't want to eat dinner as he was starting to feel a bit nauseous so he just sat on the couch with me next to him and leaned his head on my shoulder. He may be  6' 5" and now 17 years old, but he still needs his Momma. We asked for some Benedryl (which helps him relax and sleep better) and was fast asleep by 10 pm.

So the days are long, the nights right now are longer with little or no sleep, but each day is another treatment completed. Monday my boy will return home and our new normal will begin again, with friends coming over to see him, work on his ATV and yes, even finishing chores and schoolwork.