This has been a hard week to say the least. It is said that attitude is everything, well mine still is not the best, in fact I'm in hiding. I have found that I'm at a place where even the slightest bit of advise from anyone sets me off. Everyone (I too am guilty of this, quite often in fact, which is something I am working very hard at not doing) has an opinion, an idea on how we can better our life. I tend to share too much (Duh.... I'm writing a blog for the world to see) and then when I'm bombarded I get angry. Not at the people, at the advise, as if I'm not doing something right. I'm stubborn to say the very least, at times I have to stop, take a moment to breathe and then decide if the advise is helpful or not. My problem right now is, I'm overwhelmed and can't breathe!

Day after day, we wake up to the same reality. Just when Zack starts to feel better it's time for another round of chemo, or labs that show he needs blood. This week was four of five days with something.  He was pissed all week long and rightfully so. He is wrapping up his schoolwork this week to turn in by Monday. The computer program won't let him in, (we find out later, he needed to be re-registered in this program by the teacher, who was off on vacation). We see that light at the end of the tunnel with regards to that. He WILL be graduating early! I was talking to Mom today, who said I was tough on him to do his work, but in the long run he has done it, in spite of all the obstacles he has had to face.

Friday started out with a huge blessing. Frank checked the mail and we received a gift from one of his clients to help towards the medical bills. Money has been slow to come in of late (the norm for Franks business in winter) so when I saw the check, it brought tears to my eyes. I will now be able to pay off one of the smaller bills from his first surgery in June, when we didn't have insurance and we will have gas money for the coming Month.

Zack and I headed out early for his Neulasta shot, his hemoglobin count was "okay" so they ordered one unit of blood, very quickly they determined it was in his best interest to give him two units, since it would be Tuesday before we return. As Zack told Frank earlier this morning, "Dad, they say two hours, it will be four, we all know that!!" Sure enough,  it was 2:30 pm before we were out. They gave him Benedryl again in case he had a reaction to the blood. It does knock him out and helps with the nausea, but leaves him lethargic for the rest of the day. His appetite has been down quite a bit this week as well, though we don't worry about that as much, we know he will bounce back as he always does. Once we returned home he laid on his bed and went to sleep. I had planned on going out with Nancy to a movie Saturday, but it's not looking good. Frank has to work more on the indoor water feature and I won't leave Zack alone when he feels like this.

It is Saturday and my frame of mind is worse. Zack was up most of the night. He was running to the bathroom  "flushing out his system" and very nauseous as well. I had already decided last night to cancel with Nancy today, even if Zack were feeling better, my mood is so bad I don't want to subject anyone to me right now. I will continue to hide out today with the hopes that staying home and being quiet and relaxing will help "bring me back".  I wake up around 8 am, just as Frank is heading out to work. He comes in to tell me Zack is still sleeping, we decide to let him sleep as long as he wants so he can heal. Around 10:30 am I go and check on him and he is starting to wake up. Frank had called and needed me to get a couple of things from the garage and something at Lowes for the water feature, so I tell Zack I'm running out to get these items. He sits up and offers to go and bring the items to Dad. Of course I'm not surprised, like I said, he bounces back, he has age and good health on his side. I am cautious though, I don't want him running around until I know that he is okay. He is still running to the bathroom, so he agrees for us to go together.

I load up the empty boxes from Christmas and the overload of trash that wasn't picked up this week. He gets the items from the garage for Frank and we are on our way. Our first stop is the dump just three miles from our house, then Lowes where he drops me off and I run inside and out in ten minutes (I get in trouble if I stay there too long). We then fill his truck with gas and head to the building where Frank awaits us. 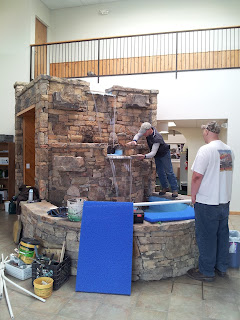 We arrive and Frank shows us the water feature he has been working on for the past month. He has replaced all the stone work and re lined the pond area. He was trying to figure out how to make it quieter, the reception area was to the left and we were teasing at how the receptionist couldn't hear the phone ringing.  Zack had worked on this in the beginning and Frank was sharing his plans on how he was going to quiet it down a bit.

Zack started to feel better as the day progressed. He knew that I wanted to stop at the grocery store on the way home and offered to stop on the way home. He stayed in the truck while I ran up and down the isles grabbing food as fast as I could. We arrive home and after eating lunch I fall fast asleep on the couch.

I wake up two hours later in time for Frank to arrive back from work. Drake and his girlfriend Kar are here visiting Zack for awhile. I am so tired I don't even get up from the couch. Frank is tired and hungry and I don't even have enough energy to get up and fix anything. Frank fixes himself and Zack some burgers, I'm not hungry so I tell him not to bother for me. Zack managed to eat a couple of burgers. I apologize to Frank and tell him I'm working on getting better. I have put the patch on that should be helping in a couple of days, and he totally understands. He has been there with me before. He knows when I am "down" like this, it's better to let me process on my own, it doesn't last long (a couple of days).  He sits down to watch TV and I find us an action movie that both will enjoy. Zack is already back in bed resting, his energy is gone again, though he isn't feeling bad now. The movie was pretty good and gave us some one on one time.

I'm hoping that tomorrow I will have more energy back and my mood is changed. I do feel I'm coming out of it and thank God those close to me know when to give me time.  I am only giving myself until Monday to get over "this". Mom and I had a joke where she would tell me I have three days to get over things. My three days are up!!