Yesterday (Friday) was a usual day in the hospital, NOT.... Zack was scheduled to be picked up by ambulance to for his daily radiation therapy at 8:30 am, since I'm not allowed to ride with them , I decided to run to Walmart and get my hair cut, pick up a few items for lunch, more aromatherapy stuff (Zack loves the Rosemary Mint smell in the room, it helps relax him as well as help with the nausea) and office supplies to help organize the multitude of medicals statements coming in. We waited and waited and waited, finally at 9 am we were told they were on their way so I went ahead and left. It turns out they didn't come for another hour and a half. I walked into Walmart's salon and was greeted by Ryan, whom had cut my hair last month. I ask him to cut it a lot shorter and please go ahead and shampoo. I never realized how just a little pampering can make you feel so good. I was totally relaxed and felt like I could conquer the rest of the day.

I return around 11:30 expecting Zack to be in the room waiting for me, he is still not back! He finally returns around noon, which is the time he is supposed to start his next chemotherapy treatment. One of the paramedics looks familiar and she says "I used to work with your Mom at the Sheriff's department", of course she meant my mother in law (Whom was also Mom). She then tells me how Betty would be so sad to learn of her grandson's treatment. We caught up for a few minutes until Bryan comes in and asks them where Zack's chart is, well they left it "somewhere" and an hour later it miraculously "showed up" at the nurses station. This delayed EVERYTHING! To explain, "they" can move the chemo treatments up only by an hour each day, so that we are able to leave 8 hours after it has begun. Because of this one "simple" error, his chemo was delayed by two hours, which in turn delays the time we can be discharged. Everyone makes mistakes, but when you have a teenager, who has already been in the hospital for five days, it's kind of hard to ask him to let it go.

Zack and I have lunch together, I then settle in with all the medical statements and start making phone calls to set up payment arrangements. I also am requesting a break in the balance based on income. Here we are six months into this and I find out from my phone calls that The Hospital hasn't filed any insurance, (because they don't have any on file?), she casually mentions on the phone, "oh, yes you have a balance of $179,000". I pick myself off the floor and ask if that is AFTER insurance (knowing full well that insurance will cover 80% of the expenses up to $5,000, then it kicks in with 100%. ) She says that they didn't have me down as having insurance, so I again gave all the information  and she tells me once they get the balance, they will be glad to take the application for assistance. At least I now have one person that I can call with her direct line. I continue with my other calls and everyone was very successful, some (again) didn't have the insurance information (even though my card was handed to them and scanned right in front of me). Once I was completed with this I was so tired, I decided I would handle the organizational part later.

I ordered Chinese for the two of us ( they deliver directly to our door!) and get more comfortable. Around that time there is a knock on the door and it is our friends Bill and Amy. (Drake,  Bills son, and his Mom came to see Zack the night before).  It was so good to see them. Amy just had major surgery a little over a week ago and was looking very good, but tired. I was so surprised to see them. They are a constant on these hospital stays as is Drake. Visitors are few and very far between these days. I don't even want to attempt to hazard a guess as to what has changed, I have enough on my mind then to try and figure out others reasoning. Zack says "whatever", so I take my cues from him. Within 30 minutes from the time they leave, dinner is delivered. We settle in for the night watching more comedies. ( A great stress reliever for sure) By 10 PM I am asleep and Zack isn't far behind.

It is 1 am and Zack gets up to use the bathroom. He sits up and without realizing it until it's too late, the IV tube connected to his port and the IV tree is caught in the wheel. He jerks back down and looks at me with fear and anger, "Mom, it hurts" I immediately call for the night nurse (Will) and tell them his port is out. Will comes in right away and sees that indeed, the port came out and will need to be re accessed. (they will have to stick a new needle and tubing into his chest port).  We are still half asleep and trying to figure out how this happened. Will assures us this is not uncommon, with so many wires, tubes and machines around I call him Pinocchio  He is not amused! Will turns off the machines , he has another patient that he must fix an IV on and will be back right away. I don't even know how long it was (not long at all) and Will was back with the IV port kit. He pulls out the old needle and I'm all of a sudden reminded of a scene from the Adams Family movie, where the kids are doing a play at school.... (if you didn't see it, you wouldn't understand). As soon as the needle is taken out (sorry for graphics) blood come out everywhere, I remind Will he is on Lovenox which is blood thinner. He grabs towels, I grab towels, Zack is just sitting there trying to "catch" what he can looking at me like "what the F?" The bleeding stops almost as fast as it starts, the port is again accessed and fluids being pumped back into him . It doesn't take long for Zack to be back asleep, so I too closed my eyes and slowly fell asleep.

I wake this morning, Zack is still sound asleep so I quietly take a shower and head downstairs to the cafeteria, leaving him a note on the board. On the way down I meet a man in the elevator, I comment to him "I look worse than you feel!" he chuckles, I then get serious and ask if he has a child in Peds. He says "yes, a little girl 15 months old with double pneumonia."  I let him know that they are in my prayers and he thanks me. I am still so out of it, that I have him let me off on the wrong floor and didn't realize it until I was all the way at the entrance. I ask for directions (yes men, a very good thing to do. smile) and am right in front of the cafeteria. Once I finished, I headed back upstairs and Zack was still sleeping. The nurse had come and gone, changed his fluids and wrote her name on the board. (Sam). I set up the laptop and started writing the blog. Once he woke up (about an hour later), he ate just a bit of his breakfast when the doctor came in, checked all his vitals and told us he would sign the discharge papers for 8 pm. Yahoo!!! Zack is literally counting the hours.

At lunch we had a couple of furry visitors. There is a group of people who bring their service dogs to the hospital to visit the patients. Since Zack had just started his chemo he wasn't really in the mood to see them, so I went out in the hall and visited with them.  The dogs were large in size and had the softest coats. I sat on the floor and both came to me and nudged me with their noses. One lay on her back for me to rub her belly, it felt so good to see a little furry friend. I haven't seen Sidi or Anubus since Wednesday morning when I stopped at the house to pick up extra stuff we had forgotten.

It is now 3 pm and Zack is halfway through with his final chemo treatment for the week. He has been tired today, so he has been sleeping quite a bit. Every now and then he moves from one side of the couch to the other so he can lay his head on my shoulder. He is excited about going home (now scheduled for 9 pm). He knows that he won't be able to go anywhere because he has a lot of schoolwork to catch up on. (he still didn't feel well enough to do much in the hospital and I for one am not going to force him while in here). Tomorrow I head into the office to put up Christmas decorations, Monday he Frank and his friend Chris will go for radiation therapy, lab work and then go and look at a nice truck he found. I'm not sure what he is going to think about once he gets his truck (one track mind... teenager...). 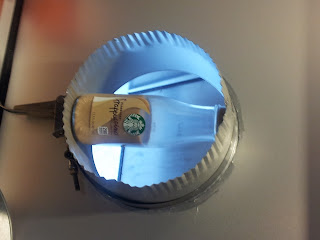 For now I will sign off and get some more rest. This will prove to be a busy, but I hope filled with fun, week. On a funny note, check out our in room "refrigerator", the port leading to the roof discovered by Zack. It really did keep things cool.
Posted by Unknown at 12:38 PM