How quickly we adapt! Yesterday, Frank and I are up early to go to our respective jobs. Zack wakes up, a little grumpy because he is nauseous. Week one of the new month of chemo is always the worst, this is the strongest treatment in the shortest amount of time. He is heading out with his friend Chris to go for his Neulasta shot and third day of radiation. He is less stressed now because he already is in a new routine and understands the procedures.

He calls me once everything is done and they are on their way back by 1pm. He needs to stop at Walmart to return a pair of overalls that didn't quite fit and then knows that he is to be home doing his school work. Chris assures me as well, that they will get back asap and Zack will get started on his work.

Once I return home from work, he tells me that his friends wanted him to come up and see them, but he told them that until he is caught up with all his school work he can't go anywhere. He knows his "grounding" is finished but wants to get his work done. (Whew.. Thank the Lord!!!)

It is Thursday and Zack is scheduled for the radiation only. (GEEZ... ONLY... SHE SAYS!!). He has decided to go alone, it is a 45 minute drive one way and the treatment shouldn't take more than 15 minutes. He says "I'll be back before you know it Mom!" I am anxious. So much has hit this kid in such a short time. He just got his drivers license in June and already he is driving so much!! He is a cautious driver, he doesn't like to take the interstate there, he stays on 25 which is a two lane road and quieter. As agreed he texts me when he arrives for his 9 am appointment. Then around 11 he calls and says that he is almost back in town and would love to go have lunch with some friends at the High School. His counts are good, so I tell him to go to the front office and make sure it's okay with them (if any sickness  is going around they know to tell him). They all eat outside on the lawn, so as not to be in an enclosed room with a large crowd. All of his friends are very conscientious with regards to his health and keeping him safe. He had a nice lunch and a couple of kids told him about fundraisers they are doing for him, but "your mother is going to get the money for you!" He tells them that's totally cool and how much he appreciates everything! After lunch he was able to see most of his teachers, get some more work from one of them and was on his way home.

He calls me from home and tells me he is going to sleep a bit. He is all of a sudden tired again. He tells me that they were ready for him at the radiology department, but he had to wait to meet with the radiologist  (a new routine on Thursdays) so he sat for 45 minutes just to shake hands and tell the Doctor that he is doing okay. He did notice though, on the way home from Asheville, he had to stop a couple of times to rest. He didn't want to fall asleep while driving ( THANK GOD!) so he stopped. He tells me that he doesn't think he can do this alone as he had previously hoped. "I'm glad you are honest with us, that is all we needed to hear, we got you covered!" and with that as my heart sank for him, I told him to go and rest.

We had all agreed in the very beginning that we had to be 100%  honest about everything! If Zack felt I was "smothering" him, too over protective, if he was hurting, sad, mad whatever is going on, we need to know. He showed us today that we can trust him. He did say however, that he didn't want me to take him all the time, "Mom, there just so many hours in a day a kid wants to spend with his Mother!!"  I teased right back and said "You think I want to spend time with a 17 year old, girl staring, truck talking redneck?"  We all had a good laugh. As it turns out, one of Franks clients works out of his home and has asked if he could help bring Zack to any of his treatments, just to let him know. Zack worked with Frank on a water feature at his house a couple of years ago and he was very impressed with Zack. He has five kids of his own and can't imagine going through this with any of them. We of course, have family and other friends offer to help  as well.

One of the teachers, who had escorted the High School Art Guild students to Washington DC last year, came by the office.  She has a large white square in her hands and says "are you ready?".. as she opens the squares start to drop, one by one, as I read Z A C K We miss you!! I see all the signatures and notes that are written all over each square, until there is no more room to write.  She tells me that she, other teachers and students put this together and had everyone sign their wishes for Zack. They wanted him to know that even though he is not in school, they are thinking about him all the time and how much they all miss him. (Especially the girls!!! she said) She was telling me how Zack made her feel safe when in DC, "we were walking around and I felt so protected next to Zack, I knew no one would mess with us, and they didn't." I had a hard time not crying and she said "oh wait until you read some of the notes." She was right, I had to grab a kleenex on more than one occasion before the "card" made it home. I thanked her and told her how hard this past weekend had been for him. He loves people and misses being in school and hanging out with his friends. He knows that people are thinking about him, but at times feels very alone. She said "well maybe now he will realize how much he is loved and missed." I had to agree, how could he not!

Toward the end of the day, I'm closing down the office when the phone rings. It is Zack, "are you coming home for dinner? I'm cooking!" "well if you're cooking I better get home then!" He laughs and tells me "Dad told me I was in charge of dinner, so.... it will be ready soon."

I bring home the "card", dinner is ready and he is in his room. I show Frank  and he is amazed at all the work and love that went into creating it. I call Zack's name as I stand in the hall just outside his room. He opens the door "YEEEESSSSS?" "HOLY SHIT!!" (sorry that's what he said, he is his mother's child). "What the....." He looks at it and his eyes light up. He is so excited! He asks where it came from and can't believe all the signatures around his name and the note. He takes it from my hands and I remind him "anytime you feel that you are alone and no one is thinking about you, look at this and be reminded that you are loved and missed and people, lots of people are out there thinking about you and your journey" He hangs it up in his room and a few moments later comes out and says "there are a lot of signatures and notes, some from people I don't even know!" He is so excited and couldn't stop hugging me. A Mom couldn't ask for anything more! 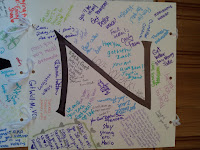 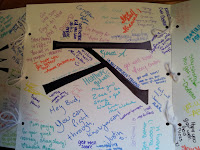 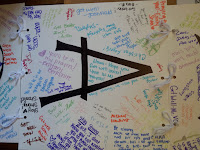 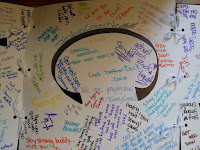 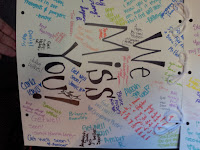 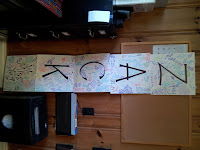