Another night with little sleep. I wake up at 4 am with one major list in my head. Who I need to call, questions I need to ask,contracts that need negotiating,  chores I need to do, office work with deadlines, bills to pay, will we go to hospital or have another week in seclusion at home. For a control freak, these MUST be answered and yet we all know, control is out the window. 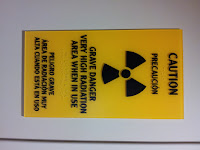 Zack takes me in to work  at 7 am. He is scheduled to pick up Chris L. to go with him for his radiation treatment today. He shared this photo with me and finds it ironic that it reads Grave Danger and yet tells me "I'm in THAT ROOM!!!"
His mood is a little better today, but it doesn't take long for the roller coaster ride. By lunchtime he comes to the office for an adjustment and naturally (he's a teenager) money for lunch. He is hanging out with his friends today, who are out of school for Veterans Day. He snaps at me again and I try and ignore, but as I do so he looks at me and says "well this day is half over and you know what tomorrow is, Yeah me!"  What he is referring to is, he was told last week that he may not go into the hospital tomorrow due to low counts, but we really won't know until tomorrow. He is worried that it will be like the last time and we go in for six days instead of five. I have mixed emotions. If he does go into the hospital, I will have to stay the entire week (at night) with him as Frank is not in any position to do so. If he doesn't then we will be in Hospital the week of Thanksgiving, which is not a huge deal, but still......

Frank went to Urgent care today and after several tests, everything came back inconclusive. There are several tests results that will be back on Wednesday. They said it is not the flu, not strep, not pneumonia, they think it might be from a bug bite, but until Wednesday they're not even sure if it's viral or bacterial. So  we continue to wear the masks when walking through the living room, stay in our respective bedroom as Frank continues to live on the couch.

As I'm writing the blog and Zack is sitting on the bed sharing the days events, the phone rings. It is a dear family friend. She is calling from Scouts and wants to make sure the rumor she just heard is not true. She knows it really isn't, but the person seemed so adamant that it was, she had to prove them wrong. She was "told" that Zack's cancer was terminal. I immediately told her that though it is a very rare cancer and if not treated is most certainly terminal (eventually), but No nothing has changed since we last spoke and due to his treatments all tests are still showing no sign of cancer.  She tells me to hold on and I hear her speak to a man about the "rumor", she tells him that she has me on the phone and indeed it is a rumor, to please let his kids and others know that it in fact is not true. At this point, maybe it's the anxiety due to tomorrow's uncertainty  Franks being sick, the lack of sleep or the Pope being Catholic, (a joke people) I pretty much feel as though I could throw up. Zack looks at me and says "whatever" Mom... My friend says "next thing you know they will be saying he's pregnant".

I post a shout out to everyone I know on Face Book, asking for them to spread the word. I know I shouldn't worry about rumors, but I know all to well the damage one like this can do to the people involved. I so appreciate my friends bringing this to my attention and hopefully it will fizzle out,.
Posted by Unknown at 9:36 PM