We had an interesting start to the day. I had a day full of plans and lets just say, it works out better when you can open a window and throw out the plans. You'll end up having a lot more fun! Since we weren't able to have the Galaxie (Zack's car that burned) towed last weekend, we decided to give it another chance today. It worked out perfectly. The tow company came out to the house, picked up the car and had us follow him to Dana. (a small suburb of Hendersonville, just 45 minutes away).

Zack was sad to see it being pulled up on the tow truck. As usual, I filmed and took still shots. Zack teased me and said "only you would want to record the worst day of my life!" I ask if this is really the worse day? He said "no, not really, but I loved that car." As we follow behind the truck I put my phone on video to record the car being towed, ( I know, I'm weird that way). The funniest part of all of this was a song that came on the radio at the time of the recording. Zack loves Country music and the song was something like, "I can't leave my love alone, can't be without her...." Zack and I burst out laughing, he looks at me and says "I told you my life was a Country song!" Thank God he has a good sense of humor and is in such good spirits. If he was not in a good space, I wouldn't have even towed it today.  We arrived at the scrapyard, they weighed the car and Zack then followed the truck to take off the new tires that we had just purchased. His plan is to resell them on the internet. He can then take that money and put it towards his next vehicle. 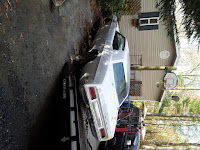 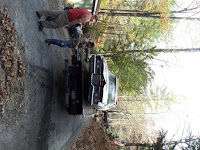 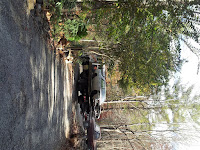 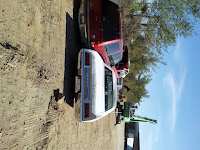 We head out, Zack says goodby to his first love and we decide to grab lunch. He is very thirst today, this is not uncommon from the treatments. He gets very hot too and starts to perspire easily, another side effect he hates. As we are eating lunch I see his mood change, he all of a sudden is tired and doesn't want to eat. He tells me that he feels okay, but all of a sudden can't eat, (also not uncommon). While having lunch I receive a call from my younger sister in law, Jamie, and since we are only a few miles down the road from her house, we go ahead and stop by her house to say hi. Zack stands in the entrance to the living room, and once again we are all reminded of just how tall this guy really is. As always, I have to snap a picture and he obliges with yet another funny expression on his face. 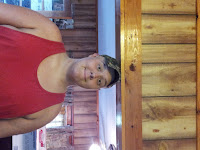 After about an hour, we headed over to Mom's house to bring Bob some sinus medicine and Moms long lost coat that was left in Jamies car months ago. Since Frank and his fishing buddy, Matt, went to see the fly fishing expo at the agricultural center, we decided to hang out and visit with Mom and Bob for a while. We had a great visit. This was the second time this week that we had a chance to see them. Zack was very talkative and lively. He started to feel better again, also not uncommon. We have certainly learned to go with the ups and downs, Zack most of all has learned to cope and deal with every situation as it comes. His friends have texted him all day and want him to come over for a bonfire tonight. He asks if he can go as long as he works on his schoolwork all day tomorrow, so we strike a deal. The rest of the today off for a full day tomorrow. Frank and I relax and catch up on the days events.


When we arrive home, Frank calls, is finished with the expo and heading home. Zack and I clean up the area where the car had been and I pull out the leaf blower (one of my favorite toys) to finish with clean up. Zack heads out to his friends house while I finish up. Frank arrives home and grabs the rake to help pull leaves out of small corners. We wrap up in a few minutes and head into the house for dinner and a night of relaxation.
As I said, the plans that I had for the day didn't necessarily pan out, but a better day was had by us all.