What a difference a day makes. Zack went with family friend, Matt yesterday morning and they were back in Brevard by 11 am having completed another radiation treatment. Zack was and continues to be in a better mood. Unfortunately I can't say the same for Frank, who came to bed with 101.5 fever, chills and aches. I immediately bolted out of bed, grabbed my pillows and headed to the couch. We have been given instructions that should any of us get sick, we have to stay away from Zack and keep our masks on at all times, everyone wash their hands A LOT and spray disinfectant. Luckily we have a can of Lysol and have been spraying the house ever since.

Frank continued to feel bad through the day, so when Zack returned home I told him he must stay away from Frank and stay in his room.  He did manage to go out to lunch with his friends and had some time to hang out with them. When he returned home He didn't even seem to mind being in his room, at least he feels he is in control. He managed to get some schoolwork done.

My paranoia has set in. I run around the house spraying the air, wiping down door knobs, handles on cabinets, bleaching sinks and countertops. We have to do everything possible to keep Zack safe from whatever it is Frank has. With little sleep the first night on the couch, last night wasn't much better.

The cat wanted in, the cat wanted out, the dog wanted to sleep on the couch with me, then cried at the bedroom door to get to Frank, then the dog wanted back on the couch, then the cat wanted back in the house, then she wanted food, then wanted to go in the bedroom with Frank. All in total, that took about two hours off my beauty sleep.  I woke up around 4 am and was determined to fall back asleep. When I woke up at 6:00 am STIFF NECK!!! I mean could not turn head to the left STIFF. I probably should have just stayed up when I first woke up!

Frank is already up and in the home office preparing to send his employee out for the day. Now I don't know if this is true of all men vs.women but when I wake up, I almost tiptoe so as not to wake anyone else in the house. When Frank wakes up, he wants to make sure EVERYONE including the ants... are awake. Bam Bam Bam (he doesn't pick up the stapler to staple papers together, He beats the stapler to a pulp while it sits on the desk). He goes into the kitchen to make coffee, CLANG, CLANG, CLANG. I hear everything because we have an open concept kitchen / living/ dining room which is my temporary bedroom. OoooooKAY!!! I'M UP!!!! (I said to myself!)

I go into Zack's room, wake him up to remind him he is taking me into work . Granny Linda is bringing him to his radiation and labs today. I told them to take my car so she doesn't have wear on hers. She asks if it's okay to leave him and go see Big John. Of course that works out perfectly for everyone. I head into work and am so thankful because I have two (and I'm not just saying this people!) of the best Chiropractors that are willing and able to work on my neck. I managed to make it through the morning shift of patients and by the time Doc Nancy is there I'm ready for some magic. Let's just say it took a lot of TLC but I was able to finish up the day with a lot less pain, of course as the night progressed the pain increased again but with advice from Docs Steve and Nancy to use ice and then heat I'm sure I will be back good as new tomorrow. 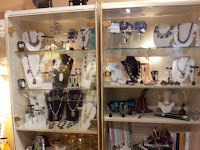 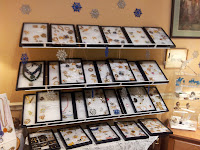 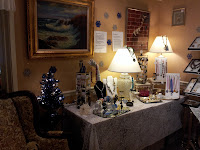 I walked over to Mom's booth at lunchtime, it is just a couple of blocks from the office. Mom gave me bags of  new jewelry and Zack and I had picked up Christmas decorations the last time we were out. They are having a Holiday Open house on Saturday (which I'm hoping I can attend for a while) and they asked that all the booths be decorated for the season. I spent about an hour and a half, rearranging, dusting and putting up decorations. It was quite therapeutic and always fun to decorate.


Zack calls me and tells me we don't have to go back to the clinic until Tuesday. He is supposed to go into the hospital for his Chemo treatment next week, but they have already told him , he more than likely will not be going in as his counts have been too low. I remind him that we will more than likely be in the hospital at Thanksgiving and is he prepared for that. He says "we don't do anything anyway, so yea I'm okay with that, are you?" I tell him as long as he is okay, so am I. He is kind of looking forward to maybe not going in next week. He still has to go for radiation tomorrow and Monday, but tomorrow will be a short day for him. My plan is to take him and once finished meet Nancy for a couple of hours of girl time, which is long overdue for us.

As I am finishing up the day, Zack calls and asks if he can go to a bonfire with the FFA from school. No one is sick and he can visit with some of his friends for a couple of hours.  How can I say no? If he were at home he would have to stay in his room because Frank still has a fever. So I tell him to pick me up at work at 8 pm and that will give him plenty of time to see his friends and I can get the weeks work wrapped up.

We arrive at home and Frank is once again "kicked" into the bedroom and I start the sterilization of the house. He has decided to go to the doctor tomorrow to see what is going on. I'm sure it is nothing serious, but he doesn't like being sick and is worried he is not getting better. I make up my bed on the couch, plug in the  heating pad and Zack comes into the living to watch Big Bang Theory and catch up on the days events.