Happy Valentines Day! What's in this special day? Franks , Nephew Kahlebs, and Sister in law Tammy's and my special little buddy Matthew's birthdays. It was also a very hard day for one very special person in my life, Mom. She and Dad were married on Valentines Day back in 1969. With each year, since his passing she misses him more and more. When I called her today, she simply said "I'm okay, I'm in bed." I understand that feeling. I know what it's like to stay in bed and want to hide out from the world. Not face reality, even if just for one day. She has every right to stay in bed.

Zack had the day to relax and hang out with Donald. He ran a couple of errands for me, like taking jewelry boxes that I re organized back to Mom's booth and pick up Franks birthday cake I had made from our local bakery. Frank used to love it when his mother made red velvet cake with cream cheese icing and since I lack the talent and time, as I told him later "my birthday present to you was to hire someone else to make your cake." He thought that was hilarious. I could tell Zack was tired and felt bad about asking him to do these, but he insisted he was around town anyway and he wanted to help with Franks dinner. 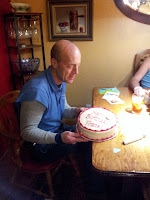 He and Donald went back home and hung out with Lyndsay (Donald's girlfriend and former neighbor of ours). She is an absolute sweetheart, so it's always a pleasure to have her visit. We invited her to stay for dinner, but she had plans to hang out with her Dad.  Zack had grilled some steaks outside and I prepared the balance of the meal. The four of us sat down and enjoyed a nice relaxing dinner. This was the first time Donald has ever had steak, so it was a pleasure to see him enjoying it. We sometimes forget and take for granted what we have, Donald has a way of reminding us how truly blessed we are. Zack has hidden the cake in his room until time to light it (we used a tea light candle) and presented it to the Birthday "boy" with a loud Birthday song.. Frank was touched as I reminded him of the cakes his mother used to make for him, as he remembered, he shared a couple of stories of special birthday's when he was younger.

The rest of his night was what he had asked for, a meal, the couch and sleep. We left him sleeping on the couch and I told the boys it was bed time, as we have an early day at the Cancer Center.

It is now Friday. We again begin our day at 6:30 am with an 8 am appointment. This appointment was for blood transfusion and possible platelets. Donald insisted on going with us again, even though I "banned" friends from full days at the center. He has a special humor and having him around, helps Zack to lighten up a bit more during treatments. We arrived, Zack's port was accessed and now the waiting game. Does he or does he not need blood. Dr. B came in to check out his leg, which is now obviously infected with an open area. The good news, it's not a tumor, the bad news, Zack's counts are not conducive to quick healing. Thus, he must continue taking the antibiotics until gone and use the special cream as well. Finally, I am breathing again.

The nurse comes in and says that his counts are right on the border, but they are going to give him two units of blood since they expect his counts to go down more over the weekend. They have ordered the blood, but they expect it to be an hour or so before it arrives. Since the room is small and I have bookkeeping to get to our CPA, I move to the children's art area in the lobby. I sit at a small square table with bright colored green chairs. There is a large picture window overlooking the Hospital which is directly across the street. The sun is shining brightly into the room and the heat that is radiating on my back is almost healing and relaxing. As I begin on the bookkeeping, a couple of children come in with their mothers. One we see all the time, she is enamored with Zack and asks who his friend is. This is the first time that I sit in this area, so it was a completely different and special experience. Zack and Chris came out to join us, saying they were bored and wanted to wait there for his blood to arrive. The young girls mother and I share "cases". He daughters was in the knee bone and had a portion of her bone removed. I see that her hair seems to be growing back, but don't mention it. As we have discovered, the hair can come and go during treatment and for most is a very sensitive area to talk about. As we continue to sit there, more people come in and more stories are shared. We are joined by nurses who are coming out to get blood pressure, temperatures, etc... It is loud and full of positive energy. I have yet to see anyone walk in with a gloomy look on their face. Both parents and children are full of smiles and almost excited for the next step to begin. Perhaps we are all counting the days until these treatments are over. As I continue my paperwork, I look up and see Megan and Melanie (my very good friend .. also Chris' mom and sister). She is here to have some tests run from her previous stay at the hospital before Christmas. She runs up to me and Zack and gives us big hugs.

Mel and I visited for quite a while. Neither of us has had much time to get together (she has three other children and helps care for her sister and mother). She shares how she wanted to do a fund raiser with bracelets for Zack at the school and they said they already did their "thing" for him and can't discriminate against the other young lady who also has cancer. Mel was shocked and said it was never her intention to do that, she simply wanted to do something for us and understood. I'm sure the school officials are now (with three students battling various types of cancer) being faced with new challenges they have yet had to deal with. She advised Mel that they were looking into doing a joint fundraiser in the Spring for both families, but wasn't sure if that could happen or not. Mel was disappointed, but if I know her, she won't give up. My gift is that Zack is graduated and the rest will be full of celebrations!! 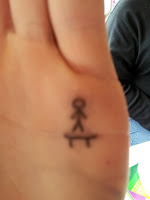 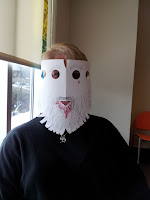 As she and Megan go in to see the Doctors, I head out to grab lunch. When I return, Zack and Donald are back at the table, this time with his blood transfusion starting. They are sitting at the table drawing. The arts teacher gave them all sorts of papers, cut out gadgets, strings and pretty much anything else they could think of. Zack drew his favorite animal, the octopus. He says it's his favorite because when attacked it can detach a tentacle to distract it's enemy and get away. Later the detached tentacle will grow back. He likes the idea of regeneration, which makes sense, what he is going through is a form of that.  Donald is making a mask and once finished, presented it to me as a gift.  He also made a lovely Valentines card for his girlfriend. We are all being super silly and laughing so much at times it was hard for me to gasp for air. Zack drew a stick figure on his hand and a line underneath it, he then proceeds to show me and everyone else in the room that when he moves his had, it appears that the stick figure is jumping on a trampoline. This entertains the entire room for at least a half an hour. 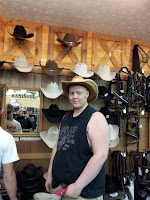 Time seemed to fly today. I got all of the bookkeeping balance and sent to Ruth, all the while visiting and having fun. Rhonda had asked if we could all have dinner together, but Zack was starting to feel weird. (We later determined it is the antibiotics that are upsetting his stomach). As we are driving towards Brevard, both boys ask if we can make a quick stop at the Western store on our way. Of course, I would do anything for them, so, we stop, Zack looks at belt buckles, hats and wallets. As we walk through the boys start trying on cowboy hats. They are even putting them on me!! Zack is not impressed with his lack of hair. He says "how do I even know what I would look like in this with hair?" He has always wanted a western hat, but has decided to wait until his hair has returned. He decides to get a hat and I surprise him with the wallet. Zack mentions that he is starting to feel a bit better and we agree to meet Rhonda for a "Belgian break". This is the time between lunch and dinner when we grab a sweet treat with a cup of coffee or hot chocolate.

Rhonda and Peter are thrilled to meet us at Denny's. We place our orders and the humor begins again. Rhonda has never met Donald and he is in rare form. As he sticks four straws together and tries to drink his beverage, the straws come loose and I am sprayed. There wasn't a dry eye at the table, as I jerked back and everyone thought is was hilarious. Rhonda looks at me and says "Oh my God, he is a male version of you!" Then it hits me. Donald is the clown (which I have played for many years). He is the one that is trying to make everyone laugh, especially his friend. He has been through and is going through so much and yet he is trying to make us feel comfortable. Another friends we are blessed to have in our lives. Zack has laughed so much today, he even said the day just flew by.

As we are driving home, we hear the weather report is supposed to include snow tomorrow. Rhonda and Mom were supposed to go grocery shopping, but my fear is that the bad weather will hit Asheville first and Rhonda won't be able to make it to Hendersonville, where Mom lives. Zack calls Drake, who agrees to meet us half way and bring Zack and Donald back home. I then go to Hendersonville and can take Mom shopping. Everyone wins!!

Mom and I head out to the grocery store, we grab enough groceries to last her a week. We are having a great time visiting and decide to continue on with dinner. By the end of the evening we have spent about three hours together and have our mother - daughter "fix". I know how hard yesterday was for her and am pleased to see she allowed herself a day to mourn and today has moved on again appreciating life, or as she puts it being "content".  I now can return home knowing Zack will continue to heal. We go Tuesday for his Neulasta (Chemotherapy can lower your white blood cell count, raising your risk of infection.1Neulasta® helps boost your white blood cell count—your body’s natural defense.2 A sufficient white blood cell count may reduce your risk of infection.) and return to the Hospital week after next, so his body can catch up a little next week.