"Look Mom, I have eyebrows!" 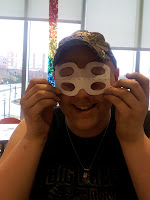 We are at the Cancer Center. It is 9:30 am and we have just found out that Zack does not need a transfusion. He is feeling great and he and Donald are running up and down the hall scaring the nurses with his many masks.  At one point, Zack looks at us all and says "Look Mom, I have eyebrows." Of course it was the little bits of yarn on the mask. We are just waiting for the Doctor to come in and go over his labs with us and check his leg to see how it is healing. As you can see, Zack is in a great mood. He told us this morning that he knew he wouldn't need a transfusion, so this means we have the rest of the day to "play".

His plans for Saturday, are to go see a Monster Truck show with Donald, Drake and a couple of other friends, so he has even more reason to be excited. The last time he was "allowed" to go to something of this magnitude (where there are large crowds) it sleeted and it wasn't safe for him to go out. Today his counts are at a very safe level. It's so nice to see him bubbly again and goofing around. Of course, with my sense of humor, I told the boys that they could only go if an adult was present, so I had to go with them. I wish I had taken a picture of their expressions. After a few minutes I let them in on the joke. I have been advised that payback is hell!!! We headed out and went to check out a furniture store I have been following on Face Book. This store is actually the reason I made a new friend in Asheville. Karen Marie and I have promised to meet in person some day for coffee. Our story goes back to December as mentioned in my previous blogs. 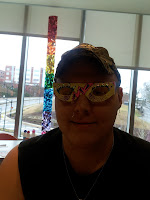 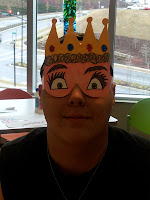 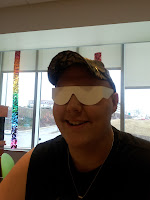 The store was very nice. It has high quality used furniture, they either handle on consignment or from Estates. They had a gorgeous red leather sofa and matching chairs and ottoman. It turns out the set was hand made in New Mexico by a Native American. You can see all the details, the fringe, the craftsmanship. There was only two problems. One was the $1,200 + price tag on just the sofa alone, the other the size... huge and that won't work in our small living room. The owner of the store showed me the original receipt for the items, $24, 000 Thank you very much!!! While there, the boys went in to a hobby shop next store. When I went to retrieve them, they had several model car kits in their hands. My favorite phrase is "do you have the money for those?" They look at me and with pouts on their faces, put the kits back. I don't mind spoiling them every now and then, but it is good to occasionally say no. 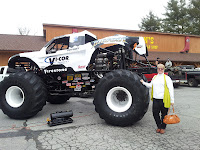 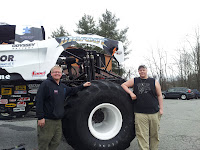 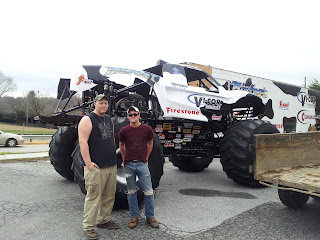 Our next stop was to buy the tickets to the Monster Truck Show. Imagine our (yes, even mine) excitement when we pulled into parking lot and there stood "Big Foot" himself. The owner, Darron Schnell was standing next to it, heating up the engine with a diesel heater. As I walked up I introduced myself, Zack and Donald. I explained that tomorrow is the first time in a while that Zack would be able to go to something like this and was so excited. He showed us where he enters into the truck (explaining that it's hard to get in with a fire suit when they don't bend easily). He went on to explain how he must keep the special fuel heated. It doesn't work when the temperature is below 53 degrees. It was kind of him to take the time to  explain and show us the details. At this stage of the game, we try and find as much fun as we can, heading to, returning from and during treatments.

Knowing that I really wanted to visit with Mom, Zack mentioned us going to Hendersonville. They both said they were fine with it, so we called Mom and told her we were on our way to pick her up for lunch and a bit of shopping. Being in a distracted state of mind, I told Mom we would be there in approximately 45 minutes, well.... we stopped at one more store on the way and an hour and a half later, we showed up. Poor Mom was starving, so we quickly picked her up and headed out to lunch. Donald and Zack continued to entertain.  I could tell, though Mom could not really understand everything due to her lack of hearing, she enjoyed watching Zack laughing so much.  After lunch, we went for a few groceries, stopped at a couple of other shops and brought Mom back home. Donald was being so funny, as we were leaving Moms driveway, he looked at my brother Bob and said "I love you" in a funny voice. My brother, who is quite witty himself, didn't say a word. Donald rolls down his window and says "say it back", Bob is trying to keep his composure and smiling responds with "I thought that goes without saying". Now, keep in mind this is only the second time that my brother has met Donald.

When we return to Brevard, Donald asks if we can go by his house. He wants to pick up a couple of things and wants me to meet his mother. Nancy is a petite woman, who barely weighs 90 lbs. She has survived Non Hodgkins Lymphoma, breast cancer and now has severe diabetes and cancer in her spine. She apologized for "farming" her son out to us, but said she is so worried about everything he has gone through with the passing of his grandmother and now her health issues. She wants him to know that it is very serious, but doesn't want him to have to witness it on a daily basis. She seems to be very sweet and you can tell by the way Donald looks at her, that he loves his mother very much. As we try and find a healthy balance between caring for Zack and supporting his friend, it helps to remember that there are still others out there in more pain than us, with a harder road to travel and anything we can do to help, is our duty.