Since Zack had the milder chemotherapy yesterday, today he was only required to have his Neulasta shot and lab work for his blood clot medicine levels (Lovenox).  I asked him to stop by the office for a couple of bags of specialty chocolate I purchased as Valentine's gifts for the nurses and doctors. Of course, I find out later that he forget them in his truck, but we will have a chance to give them out on Friday, when we return for blood and platelets.

He arrived early for his appointment, bringing Leah, baby Landon and Donald as his company. He was in and out of there in fifteen minutes which thrilled him. As he was heading back to Brevard, I called and asked if he minded going into Hendersonville to Mom's to pick up her couch. She had purchased a "new" one at Habitat and they didn't feel like taking her old one (which is still beautiful, just not as comfortable anymore). So, being his typical agreeable self, he headed in that direction. He picked up the couch, told his Meme that his leg is healing up very well and was back on the road, now with a bright gold toned couch, on the back of the bumble bee!! What a sight that must have been! Instead of going to the dump with it, they stopped at a thrift store in Horse Shoe (a small town in between Hendersonville and Brevard). He said the lady there was thrilled to take the sofa, as was he that she took it. Mission accomplished!!! 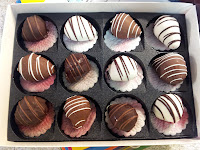 Frank worked all day, as did I. The weather was cold but he was able to work on his maintenance jobs. At lunch Nancy and I were heading out the door when she spotted a package. Picking it up she saw my name on it, but since we had to return early for a new patient I opted to open it when we returned. What a wonderful surprise! My hubby had arranged to have the box delivered to the office for an early Valentines Day gift. It was filled with a dozen huge chocolate covered strawberries! Since I already ate 5 of them, I can attest to the fact that they are DELICIOUS!!! He has never been one to do things like this, so when he does, it makes it all the more wonderful!! He and I have been through so much the past couple of years and knowing that we are getting stronger as a couple is the best gift in the world! The chocolate strawberries are a pretty close second. His birthday is tomorrow and I have a few tricks up my sleeve as well. Not being one to bake much, I arranged for the local bakery to make a two layer red velvet cake (his favorite) for him. Zack and I already arranged to make him a steak dinner and the cake will be his surprise. It's so nice that we will have the time to celebrate his special day, just the three of us, which is just how he likes it.

The rest of Zacks day was spent hanging out with his friends, who were out of school early today. His leg feels better and it's easier for him to walk. He is frustrated that he has to take antibiotics and doesn't want to continue with them even though his leg is getting better as a result. We try and explain how it all works, but who can blame him. He has never been raised taking a lot of medicine. He has always been healthy and still is. The chemo and radiation just puts things out of whack for awhile and until he is done with treatments his body won't be able to fight off any kind of infection. He promises to continue taking them until we talk with the Doctor on Friday. Once I arrived home after work, he showed me his leg and it does look better, but still has an infection, so I firmly tell him to do what he has been told. He isn't in the best of moods, but agrees to do so. I am breathing so much easier, as is Frank. The fact that it is getting better and smaller in size is great news

Zack told me that he also got some good news at the Cancer Center today. He said his treatments should be done by the end of May or middle of June. They were  "supposed" to complete around the end of April but with the delays in giving treatments (due to his counts being low several times) it will be later. We will be celebrating his graduation as well as the end of treatments. What a Summer we will all have!!!

It still seems so far away, but we finally have something to look forward to. Once treatments are completed, he will be tested every six months for several years, to ensure there is no return of  Ewings.  He will be able to return to school to learn his trade, get a part time job and pretty much live his life.
Posted by Unknown at 9:43 PM