Sunday was a pretty normal  day. Frank was able to go fishing for the first part of the day. I was able to get stuff caught up around the house, we finally got the base board installed after seven years of "forgetting". It was fun for me because I have never used a band saw before, I actually even learned how to cut at a 45 degree angle. My usual great therapy is also to rearrange the living room, so I threw that in for good measure.

Zack has been feeling pretty good today. He worked on his schoolwork most of the day, (or at least that's what it looked like ..smile) The rest has done him good as well. The pattern has been for him to run around non stop on the days he feels well, but then he gets too tired and it's hard to tell him to pace himself when his own mother doesn't do it! The rain has kept him from working on his car, but the rain is a welcome relief for us since the water tables are down so low.

One of my dear friends child is in ICU at the very same hospital where Zack gets his 5 day treatments.. She developed several blot clots in her legs after a biopsy on some polyps. The clots moved up into her lungs and heart. She is 18 years old and an absolute sweetheart. We have been standing near the phone waiting to hear some good news, but her progress is slow. The Doctors say they need to wait for the clots to dissolve before they can see what damage there is to the heart. It is so hard to hear the despair of my friend. She just sits there waiting to see what is next as she watches her daughter'e weak state. I want to be there to take care her, to do whatever I can to make this easier for her and her family, but there isn't anything we can do. We have asked for community prayers, gone online to ask for more prayers. At this point that's all "we" can do.

Trying to continue on with our "normal" day, we three sat down and watched a movie. "The Hunger Games", okay maybe not upbeat and happy happy (DUH), but we like Sci Fi and as far as that goes, it was pretty good. It was nice just to sit and enjoy the simplicity of watching a movie.

Monday, September 1, 2012
Since we didn't make it to see Big John (Frank's Dad) yesterday, Frank and I went today. We had a nice relaxing lunch and as it turns out the server was a man that my family has known for 20+ years. His name is Michael and he remembered back when we had our Antique Shop. He remembered my name as being either Sabrina or Samantha (both of them were witches, was his comment) I get that a lot, so I laughed and told him he wasn't the only one that has said that before. It was so nice to see him, with a high five and big hug. 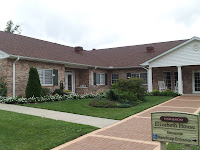 When we arrived at Elizabeth House to see John, he was sitting outside on the patio smoking. (his favorite past time). We walked the perimeter of the building and enjoyed the beautiful landscaping. John loves it there, has a beautiful room and says it is the nicest facility he has ever been in. It's good to see him that happy. He knows that he may not be around  much longer, but at least at this moment he is enjoying where he is. He asked where the "curtain climber" was. I explained Zack was doing his school work. He asked about his playing football, I told him he decided
not to do so. Frank had decided earlier not to tell John about what Zack is going through and everyone was in agreement (we didn't feel he needed to deal with another thing), the problem is, John doesn't drop anything. He kept saying how Zack needed to do this and that, and he just needs to buckle down and commit. I wanted to grab him by the throat and say "you don't know what the Hell you are talking about" "You don't know what the Hell HE is going through right now". I look at Frank who looks so lost and turn to John when a feather falls right in front of our faces, I laugh and show John the feather (which of course makes him forget the conversation). 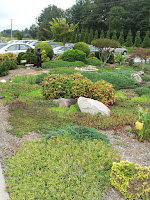 We strolled around the grounds and he and Frank were having a contest over who knew the most plants. Well, since Frank is in the business you can guess who won. It's hard to witness their father / son relationship. As Frank was walking around, John was telling me everything that Frank could learn from the landscaper. I tell him, the landscaper could learn a lot from Frank. Being totally spoiled by my parents and recognized for anything and everything it's hard to witness first hand as Frank again tries to be recognized by his father for his achievements. 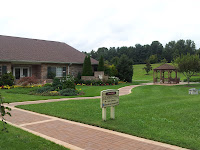 We visit for about an hour and are sitting back out on the patio, when a group of five older people come out and start talking about their mother. Having met one of the men earlier, I know that the mother has advanced stages Alzheimer's and has pneumonia. It's hard not to hear them as they are right next to us. One of the women leaves to check on the doctor and the others are talking about how she won't let the mother go, they are worried about her and don't know how to explain what the mother is going through. The conversation continues when the woman returns. She looks so lost and sad. I walk over and introduce myself. I ask if I can "intrude", and explain briefly (yes I said briefly) my own history with my Dad and Alzheimer's. I try and offer some support as they explain where their mother is at this stage. I offered suggestions as to the questions to ask the Doctor and answered questions they had about their mother not eating. It was like I was talking about my Dad. The one woman they were most concerned about finally broke out and said "I'm not ready to loose my mother", She asked how I dealt with THAT!!! I told her I could only offer my own personal feelings and to me it was not about "me" and "my" needs, it's what is best for my Dad. "Would her mother want to continue with feeding tubes and wires," "what are her mother's wishes".  If she can answer those questions honestly then the decision is not really hers, but her mothers. I know in my Dad's case he pushed away the food and water. They all said their mother already said she wanted to go, but was worried about them. She asked "what do I tell her then?" I told her "that's when you give her a great big hug and kiss, and even if you are lying, you tell her you are all going to be fine and it's okay to go". Frank was motioning for us to go. (John was starting to get grouchy) so I apologized if I was overstepping their boundaries.They said that I must have been meant to be there, they haven't gotten this much information from anyone at this point they have been waiting all day for a Doctor to come and talk with them and they appreciated my input. I told them that their mother just got arrived and they need to give Hospice a chance to answer all of their questions. They are awesome people and know what they are doing, before,during and after care. Hospice helped us and my sister during his last days.  They said "yes, but this has happened to you and your family, you know what this feels like, which is different". One of the ladies must have been a school teacher, she looked at me and said I would give you an "A". We all laughed and I gave them one last goodbye.
I almost didn't go today. I have said so many goodbyes to John and each time gets harder and harder. That's why Zack didn't want to go again and we respect that. Now at least I feel that I was able to help someone that needed something more than even John. As we exit the building, I stop at the front desk and tell a nurse about John's habit of "lighting up" while his Oxygen tank is on. The nurse get HIS nurse and as we are leaving, she is telling him the rules.. AGAIN!! .

Being back home,  Zack has two of his friends here. He is feeling well enough to go and install the new parts in his car. His hope is that he can drive the car home. (I actually haven't seen it in person yet). Tomorrow is another treatment.  We have named them all, this one is the hair removal treatment. Vincristine. It doesn't make him as sick and he doesn't have to return until Friday for labs. While he has his treatment, I will go see my friend and her daughter who are in the Hospital across the street. Zack won't be able to go as protection against getting sick. Even if his numbers are good, there's no reason to take a chance. Next week is the Hospital stay again.

After an emotional day, my plan is to sit and watch TV and just relax. There are so many things going on in our lives that we can't control. Keeping the faith, positive thoughts and friends and family support are key ingredients to surviving! I we are so lucky to have it all!
Posted by Unknown at 8:02 PM